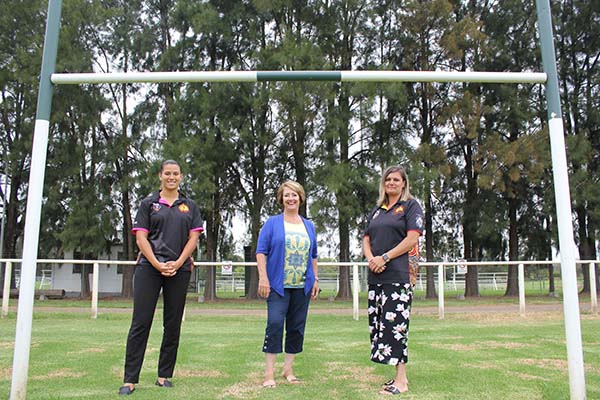 As a strong supporter of all sporting codes that backs the rising popularity of female participation in male-dominated sports, Council has taken a lead in sponsorship by donating $7,500 towards the day.

Penrith Mayor Karen McKeown advised that Council looks forward to welcoming visitors from far and wide to Penrith for the tournament and adds “we were thrilled to learn another fantastic sporting activity is set to take place in our City, which has an ever-growing number of recreational facilities designed to accommodate events such as this one.

“Given the many grassroots opportunities available to our community’s aspiring sports stars, in an area seeing unprecedented population growth, Council is investing millions of dollars to deliver green, open spaces where people can take part in everything from organised sports through to passive recreation.

“The Kingsway is a great choice for this knock out competition and for those to come in the future, as further development is currently taking shape at the precinct as part of our Sport and Recreation Strategy.”

Rondelle Ryan, president of the Blacktown Red Belly Warriors, said teams will come from areas as far as Dubbo, Kempsey, Newcastle, the South Coast and Redfern.

Ryan notes “Women are growing in all aspects of life and they aren’t recognised as much as they should be in sport, especially in Rugby League. My grandmother ran knock out competitions for many years in Blacktown, we recently lost her so this is for her - we wanted to keep that legacy going for our mob and to showcase women in the game we love.”

The club has also organised for women from NSW Ambulance and Tackling Violence (Women NSW) to attend the inspiring event.

Ryan continued “We are so grateful that all of the Councillors have come on board for the inaugural women’s knockout competition happening in Penrith. We appreciate that they value the importance and can see the awareness this will bring to women in sport and for our Aboriginal community.

“With that sponsorship money, we will be able to buy trophies for the kids’ teams who will be playing, we will have a tent for our Elders, and we will have stalls for community groups to be able to network with the community.”

Aimed at being a family-friendly day, youngsters will get the chance to be painted up in ochre and taught traditional dances.

Image: (L to R) Shaylee Bent, Penrith Mayor Karen McKeown OAM and Rondelle Ryan at The Kingsway where the Women’s Aboriginal Knockout will be played on Saturday 6th February, 2021.