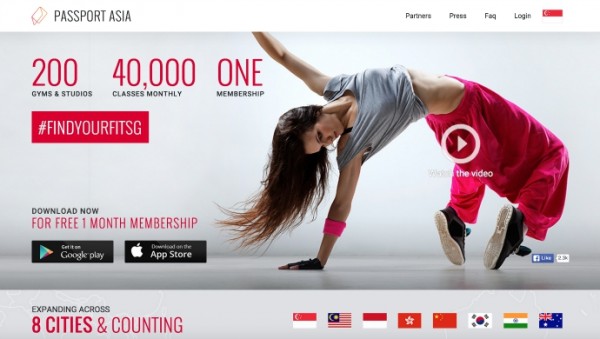 Singapore-based fitness sharing start up Passport Asia has reported the accumulation of its first S$1 million in sales during October, reaching profitability in the same month.

With a soft launch in March and its official launch in June, the fitness pass/sharing 9 gym aggregator) app attained profitability the same month, with profits about 15 to 20% of gross margins.

For a monthly fee, the app gives members access to more than 300 partner gyms in Singapore, with the most popular class sign-ups being  yoga, circuit training and dance classes.

Membership costs S$99 for unlimited sessions and S$59 for four activities a month, while a trial pass starts from S$9.99 for one session. To date, the app, available on Apple and Android, has been downloaded 30,000 times in Singapore.

A jiu-jitsu and gym enthusiast, Chandran said he and some of his fitness-conscious friends found themselves paying for several gym memberships each month as they sought to enjoy the different activities offered by different fitness centres.

He thought a single membership providing access to various activities at different locations would take care of that, he thought.

Chandran also noticed that some of his friends, who were trying to lose weight, started to lose their motivation because of a lack of variety in their fitness programs.

He explains “my friends were motivated at the start to lose a (few) kilos, but after a while things got mundane and boring.

“They wanted to do a variety of things and it was getting very expensive with the different memberships.”

Since its launch the company has been backed by whose investors SingPost Chief Executive Wolfgang Baier and Boston Consulting Group (Singapore) Managing Director  Bernd Waltermann.

Passport Asia’s staff complement has quickly grown to a team of more than 30 in only half a year, now backing the initiative’s launched in the Indian cities of Delhi and Gurgaon, and Malaysian and South Korean capitals of Kuala Lumpur and Seoul.

The company plans to expand to more than 12 cities by the second quarter of next year including, it is understood, Hong Kong and the Australian cities of Melbourne and Sydney.

Commenting in the success of the venture in an increasingly competitive space, Chandran stated “for a tech start-up barely six months from launching, to hit profitability now is a huge milestone, not just for us, but for the mobile tech space in general, and Singapore’s start-up ecosystem.

“We are the only fitness-sharing app in Asia that is profitable, and I believe we have cracked the mobile fitness-sharing model in a way that ensures sustained, defendable growth over the long term.”

For more information go to www.mypassport.asia