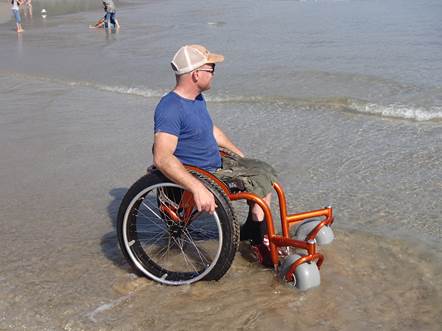 Aiming to improve the beach experience for people with disabilities at Wilsons Promontory National Park, Parks Victoria has expanded its range of available all terrain wheelchairs.

Having previously offers a motorised TrailRider and a range of beach wheelchairs to park visitors with significant physical disabilities or mobility limitations, a new wheelchair, described by one user as a "monster truck" version of a normal wheelchair, gives users complete independence at the beach.

The all terrain wheelchairs at Wilsons Promontory are designed for different abilities and are available for both adults and children and are suited for sandy and semi-rough tracks where conventional wheelchairs cannot go.

However, with manual wheelchairs not able to travel on sand, in the past Wilson's Promontory had one wheelchair that could be taken on sand but it needed to be pushed by someone else.

Fauteux told the ABC “providing that access and making sure people can have those same experiences is something very important that an agency like Parks Victoria can do ... and I think we have a responsibility to do it."

Bill Forrester, the founder of Travability, a company that specialises in inclusive tourism, said he hoped the new chair inspired tourism operators.

Forrester added “it's really important that it sets an example, so not just Parks Victoria but a motel operator at Lakes Entrance could think 'I could buy one of those or maybe we could get together in the town and get a community one'.”

Forrester said going on holidays could still be tough for people with a disability, adding “a lot of tourism operators don't understand what disability is, as silly as that sounds.

"But I've coined a phrase that disability is the only minority group that anyone could join at an instant, which simply means people with a disability represent the whole population."

The new beach wheelchair at Wilsons Promontory can be booked in advance by anyone who needs to use it.