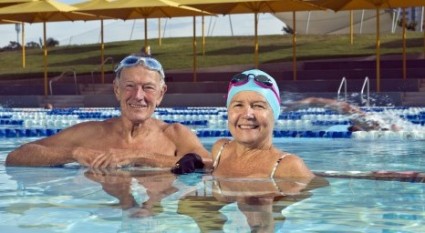 Among those delighted with the City of Sydney’s decision to keep the heated pool open throughout winter are couple Tony Andersen and Gillian McDonald, who swim regularly as part of a rehabilitation program.

The outdoor Olympic swimming pool was originally intended to open just eight months of the year, from September to April.

But following major renovations, Council agreed to trial year-long operations for two years after the pool reopened in 2013.

Commenting on the year round opening, Sydney Lord Mayor Clover Moore stated “since the City’s award-winning redesign, Prince Alfred Park Pool has been overwhelmingly popular among swimmers, even from May to August.

“Four times as many visitors as we had predicted swam through last winter, so we will be keeping Prince Alfred Park Pool open all year round.

“Many have realised that it’s nice and warm down there, sheltered from the wind with the winter sun beaming in, so we are delighted to extend the trial of this fantastic pool.

“The year-round operation provides permanent employment opportunities for both the pool and café staff, so extending the trial is a great outcome for the swimmers, everyone who enjoys a coffee there and the dedicated staff.”

Total attendance at Prince Alfred Park Pool last year, the first full calendar year in which data could be recorded, surpassed the target by 127%. 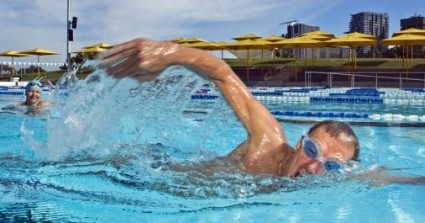 The City of Sydney is home to four other aquatic centres: Victoria Park in Camperdown, Andrew (Boy) Charlton Pool in Woolloomooloo, The Ian Thorpe Aquatic Centre in Ultimo, and The Cook + Phillip Park Aquatic Centre opposite Hyde Park.

Victoria Park is also open year round while the Cook + Phillip Park Aquatic Centre and Ian Thorpe Aquatic Centre are both indoor facilities, designed to make the most of natural light.

The Ian Thorpe Aquatic Centre is a standout example of contemporary architecture. Designed by Harry Seidler and Associates, the building is shaped like a wave and is home to three indoor pools.

It followed eight other awards for the pool and park design team of Neeson Murcutt Architects and landscape architect Sue Barnsley.

Images showTony Andersen and Gillian McDonald, who swim regularly at Prince Alfred Park Pool as part of a rehabilitation program.