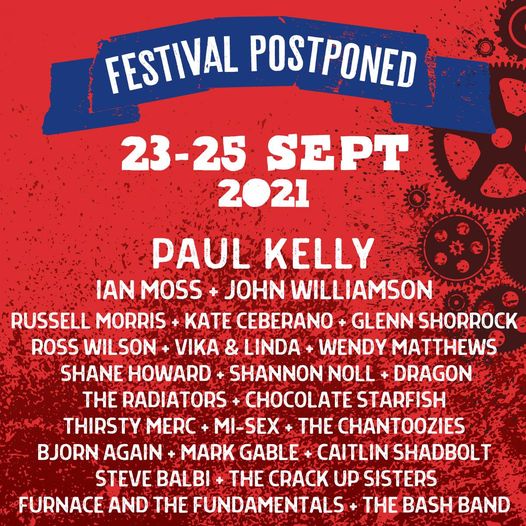 The inaugural Broken Hill Mundi Mundi Bash planned to be held from 19th to 21st August 2021 has been postponed to run from 23rd to 25th September due to Sydney's ongoing COVID crisis. Set to take place at Belmont Station on the Mundi Mundi Plains just north of Silverton, with about 10,000 people expected to attend, the festival has been promoted as the largest music and camping festival to be hosted in outback NSW in which some of Australia’s biggest rock legends will take to the regional stage.

Outback Music Festival Group Managing Director, Greg Donovan said it would have been irresponsible to host such an event in the current climate and were left with no choice but to postpone the event.

Donovan advisesd "As the situation in Sydney evolved over the last week or 10 days there were predictions that it was actually going to get better, they were on top of it but that didn't turn out to be the case.

"The more that it went on, the more it became obvious that it wasn't going to be possible to hold this festival in five weeks time.”

Broken Hill City Mayor Darriea Turley has praised organisers of the Mund Mundi Bash for their decision to postpone the event stating “I think everyone remains excited about the prospect of this event coming to Broken Hill, but sadly the timing is just not ideal given the current COVID-19 situation.

“This is a massive event, and I know a lot of people have put in a tremendous amount of work, but I think most locals would agree that delaying the Bash is the best move for now.

“The organisers should be commended for their willingness to put the safety of locals and attendees first, and profit second.

“Hopefully the COVID-19 situation in NSW settles by September and we can welcome the Mundi Mundi Bash team and a great line-up of performers to the city.”

Organisers of the festival have advised that refunded tickets for the event would be released for sale Wednesday this week, with individuals able to request a refund until Thursday the 19th of August.

Donovan noted that most of the event's originally announced artists would still be coming to the Bash in August.

For the latest information and announcements on the Mundi Mundi Bash please visit mundimundibash.com.au/home