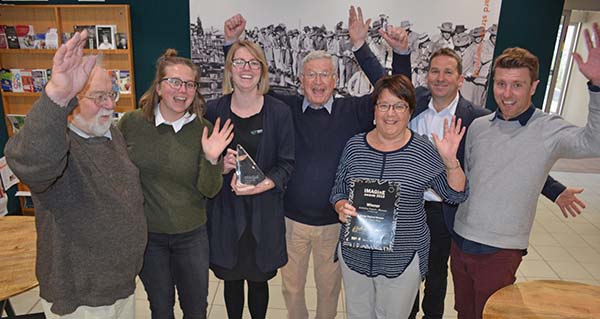 Orange Regional Museum has secured a 2019 IMAGinE award from Museums and Galleries of NSW for their exhibition All in a Day's Work.

Orange Regional Museum partnered with the Orange and District Historical Society to develop the exhibition which features 79 photographs from the Central Western Daily archives.

Orange Mayor Reg Kidd congratulated all involved in putting together the exhibition commenting, “It was fantastic to see the Historical Society cooperating with Museum staff, and for the end result to be judged of such high quality.

“Along with the thousands of people who went to see this show, I was impressed at the quality of the images and the way they brought alive the stories of Orange’s recent working history.

“The Museum doesn’t set out to receive an award judged by their peers, but when it happens, it’s a real encouragement to all involved they they’re doing the right thing.”

The exhibition was competing against museums of its size from across the state with the prize awarded for exhibitions among museums with three to 10 staff.

Michael Rolfe, Chief Executive, Museums and Galleries of NSW commended all recipients across the categories of Exhibition Projects, Engagement, Sustainability and Individual Achievement for both paid and volunteer organisations.

Rolfe noted that this year's nominations were of an unprecedented standard, stating "the strength of in-depth education and engagement stood out as did the increasing focus on environment and sustainability both in terms of content and organisational practices.”