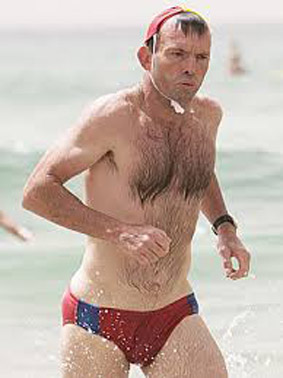 Federal Opposition Leader Tony Abbott announced yesterday (Sunday 11th August) that a future Coalition government would up its financial commitment to Australia's peak water safety agencies as part of its policy to reduce drowning across Australia.

The Opposition leader has upped a commitment to the water safety agencies from $10 million first announced in March to $15 million, as part of the Coalition's plan to reduce drownings.

Abbott, a renowned ocean swimmer and surf life saving competitor (as pictured), said the Coalition recognised that investing in water safety could save lives, as well as reduce injuries.

Royal Life Saving Society Australia (RLSSA) one of the agencies that will benefit from the funding, along with Surf Life Saving Australia (SLSA) and AUSTSWIM, have welcomed the commitment to reduce drowning across Australia.

Royal Life Saving believe that the $4 million that it will receive from will enhance its work in reducing drowning in inland waterways and promote access to swimming and water safety in disadvantaged communities.

The announcement responds to Royal Life Saving research that shows that 25% of all drowning deaths happen in rivers, creeks and streams.

Just appointed as Royal Life Saving's new Chief Executive, Scarr added "rivers, lakes and dams are a common location for drowning deaths in Australia. 735 people have lost their lives in the past 10 years in a river, creek or stream. 104 people drowned in inland waterways last year alone."

The Coalition Policy to Reduce Drowning responds to Royal Life Saving concerns about the decline in swimming and water safety skills of children aged five to 19 years, which may have grave consequences as they age and are exposed to recreational water activities away from parents and lifeguards on boats and in rivers.

Scarr concludes "increasing the availability of Swim and Survive lessons to Australian children, particularly in communities who are known to miss out is a key priority. Ensuring that children from Indigenous, migrant and economically disadvantaged communities have access to the lifesaving skills of Swim and Survive may address drowning but also opens up a lifetime of safe, fun and healthy recreation in, on and around water.

SLSA Chief Executive Brett Williamson previously welcomed the Coalition commitment as "a step in the right direction", adding, in a statement, that "Surf Life Saving Australia, together with our national water safety partners Royal Life Saving Society Australia and AUSTSWIM, have identified a funding gap of just over $27 million per annum to achieve our collective target to reduce drowning deaths by at least 50% by the year 2020.