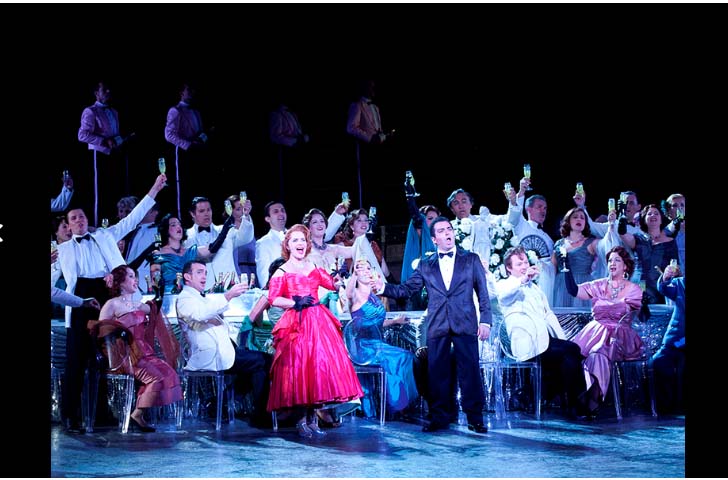 Opera Australia has announced that a limited number of walk-on roles for their spectacular outdoor event Handa Opera on Sydney Harbour are now available to purchase for $5000 - the first time such an experience has been offered.

Promoted as “the perfect gift for the opera aficionado who has everything – the chance to make their opera debut in Verdi’s classic La Traviata, in front of an audience of nearly 3,000 people", Opera Australia state that this experience will offer “an unforgettable opportunity to be in the spotlight on the huge overwater stage in one of the most famous operas in the world, with the equally famous backdrop of the city skyline, Sydney Opera House and Harbour Bridge.”

Walk-on role participants will appear during the vibrant Parisian party scene in Act 1, raising their champagne glass surrounded by the 80-strong cast including chorus, dancers, actors and principal singers in an event that Director Constantine Costi describes as “like attending an exclusive waterside party.”

This exclusive offer allows dedicated opera fans the opportunity to experience the production from the performer’s unique perspective from behind the scenes, receiving the full opera-star treatment including: professional stage hair and makeup; costume fitting; stage directions from the Assistant Director; a ticket for a guest to watch the performance and interval Dessert High Tea for two in the exclusive Travel Associates Platinum Club

Opera Australia also offers ten walk on roles each year for La Bohème, staged in the iconic Joan Sutherland Theatre. A glamourous production that sees participants enter the glitzy world of 1930s Berlin. Opera lovers from Australia, the USA and Korea have all enjoyed this cultural attraction.

Tourism Australia’s Global Manager Experiences, Karen Fitzgerald, describes her walk-on role experience in La Bohème, “I’d always considered myself more of a musical theatre fan, but I now have a new respect and appreciation for opera.

"Following my '15 minutes of fame' on the stage of the Sydney Opera House, I’m still pinching myself. I would highly recommend this incredible opportunity to anyone interested in the arts. Opera is a wonderful combination of historical and contemporary storytelling - climactic, powerful, vibrant, extravagant, emotional and now more accessible than ever.”

For more information go to opera.org.au/star

Image of the cast in Opera Australia's production of La Traviata on Sydney Harbour in 2012. Courtesy of Lisa Tomasetti.