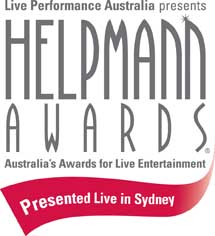 A $20 million production of Richard Wagner’s 20 hour Ring of the Nibelung, by Opera Australia, was the biggest winner at the 2014 Helpmann awards for live entertainment, presented at Sydney’s Capitol theatre on the evening of Monday 18th August.

The Melbourne Ring Cycle swept the opera category awards, including the best opera award, with Warwick Fyfe picking up best male performer and Finnish conductor Pietari Inkinen winning for best music direction. Both were last minute replacements and named “among the real successes of this Rheingold” by Guardian critic Andrew Clements.

Presented to sell-out crowds at Arts Centre Melbourne in the bicentenary year of the composer’s birth, Neil Armfield’s production drew parallels between Wagner’s tidal waves of power and magic and contemporary forces of economic and environmental disaster.

At the other end of the budget, the musical Sweet Charity, which played in Sydney’s tiny 110-seat Hayes theatre, won three awards, beating Baz Luhrmann’s high-profile but critically panned Strictly Ballroom, whose award haul was limited to best female supporting actor in a musical for Heather Mitchell. Sweet Charity took awards for choreography and direction, with Verity Hunt-Ballard winning best female actor in a musical.

Best musical went to The King and I, which picked up three awards, representing another big win for Opera Australia and co-producer John Frost.

Mullins also featured in the winner of best play, Belvoir St’s production of the modern classic, Angels in America, another marathon viewing at seven hours.

Best regional touring production went to Jack Charles v the Crown (The Ilbijerri theatre company and Performing Lines) which explored the indefatigable actor’s years of life experience, from survivor of the stolen generations to heroin addict, thief, “grandfather of Indigenous theatre” and Koori elder and activist.

The ceremony took place on the set of previous Helpmann winner The Lion King, at Sydney’s Capitol theatre. Highlights from the show, along with a preview of Cameron Mackintosh’s new production of Les Misérables were also performed.

In a Sydney Morning Herald article, several critics accused the Helpmann awards of a lack of support for independent theatre and the concentration of nominations given to Sydney and Melbourne shows.

The piece also put a question mark over the legitimacy of giving best special event to one of the award’s major sponsors. In a category without nominations, Destination NSW won the award for 2013’s Vivid Sydney.

Speaking earlier on behalf of event organisers, Live Performance Australia Chief Executive Evelyn Richardson had stated "they (the major sponsor) can’t influence or input the discussions in any of the award categories. It’s an independent process."

Best musical - The King and I (Opera Australia and John Frost)