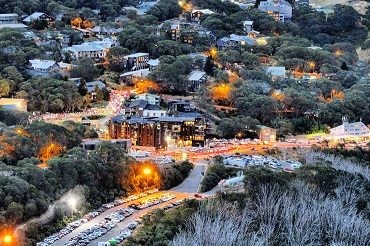 An online scam which has defrauded hundreds of thousands of dollars from visitor attractions has been reported as having re-emerged in Australia.

Operators already impacted by the Coronavirus are now having to cope with the scam, which largely targets the Chinese community with fraudulent offers of discounts to popular attractions.

As reported by The Age, advertisements posted on China’s social media platform WeChat reveal the extent of the fraud, with Global Ballooning Australia, Adventure Park Geelong and ski operators at Mt Buller, Falls Creek and Mt Hotham all subject to fake promotions in recent months.

Although tourist operators have strengthened their defences against fraud with improved processes for identifying suspicious transactions and customer authentication, they are frustrated that criminal syndicates continue to exploit gaps in Australia’s banking system and law enforcement.

Asked about the matter, Victorian Tourism Industry Council (VTIC) Chief Executive, Felicia Mariani told The Sunday Age “the surprising thing is this has been going on for a long time and there has never been any significant measures to try and shut this down.

“It is hugely detrimental for our attraction sector within an industry that has been hammered. Right now, these guys can’t afford this kind of activity to be happening to them and we need to try to protect them in every way we can."

Global Ballooning Australia, a business which markets heavily to Chinese tourists, estimates it has lost up to $50,000 to the scam over the past five years. Owner Kiff Saunders, who brought the racket to the attention of the banking royal commission, said the fraudsters disappeared for a time but are back in business, with the New Year ushering in a spate of bogus bookings. 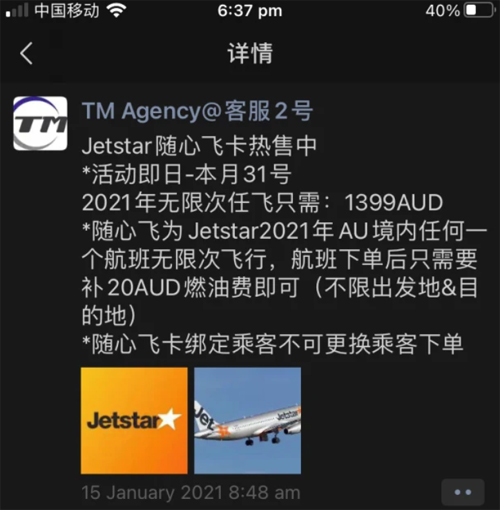 In practice, the scam sees a fake travel company place a sponsored ad on WeChat offering a discounted ticket or promotional offer for a popular tourist attraction. Unsuspecting customers - often Chinese students - transfer money into an Australian bank account held by the fake company. The fraudsters then book the attraction in the customer’s name using stolen credit card details.

If the scam is detected before the customer makes use of their ticket, the customer is out of pocket. More commonly, it takes days or weeks for the real card owner to discover they have been charged for something they didn’t buy and contact the bank.

In this instance, the bank cancels the transaction and the tourist operator is left out of pocket.

An Adelaide woman who The Age reported as asking not to be named was shocked to discover earlier this year she had been charged $1385 for a balloon ride over Melbourne and hundreds of dollars for tickets to Luna Park, Melbourne Zoo, Kryal Castle and Sydney’s Taronga Zoo in the week after Christmas, despite having not left South Australia.

Data collected by AusPayNet, the industry regulator for Australia’s payments network, shows money lost to card-not-present fraud, where stolen credit card details are used without the card itself being presented, declined by 14% last financial year. This coincided with merchants and financial institutions developing a fraud mitigation framework to bolster their detection and prevention mechanisms.

However, card-not-present fraud remains the most prevalent type of credit fraud, accounting for $392 million in reported losses last financial year.

Global Ballooning Australia’s Saunders said the fact fraudsters used Australian bank accounts to collect payments from customers suggested banks could be doing more to stamp out the practice, asking “how is it that they can just facilitate this?”.

A spokesperson for Westpac said the bank was unable to comment on “individual customer matters" but said the bank had “robust processes" to protect against scams and fraud. 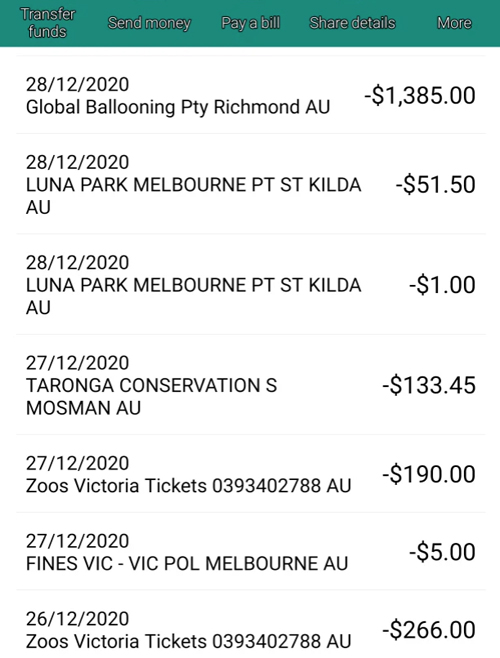 Operators such as Global Ballooning Australia have become more adept at identifying suspicious bookings, which are often made at short notice. In response, the fraudsters have upped their game.

In one instance in January, scammers responded to a request for customer authentication by supplying a photo-shopped drivers licence. The only giveaway, spotted by a sharp-eyed staff member, was the address on the licence: 17 Sample Parade.

AusPayNet Chief Executive, Andy White told The Age “we know that fraudsters don’t give up (so) the message to operators is ‘speak to your bank.’ If you use a payment gateway or payment service provider speak to them because they can help you on this."

John Forman, then Manager of Melbourne’s Eureka Skydeck, who first identified the scam in 2016 said he received little support from law enforcement agencies, with state and federal authorities each referring the problem to the other’s jurisdiction.

He told The Age “it is incredibly frustrating.

“The visitor economy has gone through hell and back and in Victoria, continues to go through hell, and we are still having to face fraudulent activity via a WeChat platform with dodgy people ripping tourism operators off.”

A Victorian Police spokesman said its fraud and extortion squad was unaware of the WeChat scam and the Australian Competition and Consumer Commission’s Scamwatch website said it had not received any reports about it.

Images: Falls Creek is among attractions impacted by the scam (top), an ad posted on WeChat offering bogus unlimited Jetstar flights for $1399 (middle) and credit card charges discovered by an Adelaide woman who never left South Australia (below).