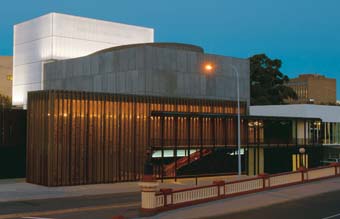 In just 12 months time the State Theatre Centre of Western Australia will open with a week of festivities and performances to show off the $91 million venue's capabilities.

The new venue is on target for completion by the middle of 2010 followed by up to four months of trials.

Western Australian Culture and Arts Minister John Day recently visited the Northbridge site as construction reached a key stage with the testing of the powered flying system, which allows a single operator to move stage scenery and lights inside the fly-tower of the 575-seat main Heath Ledger Theatre.

The orchestra-pit lift mechanism is currently being installed in the main theatre, the final pre-cast panels outside the theatre are being completed and the concrete slab to the main theatre roof is complete.

Announced by the previous Labor government in 2004 after nearly three decades of consultations and reports, the building was slated to open in late 2008 at a cost of $42 million.

Minister Day explained "this building will be in use for the next 50 to 100 years and so any cost-by-seat calculation needs to be averaged out over a very long time.

"We can't measure the value of these facilities just in dollars. It is essential for a sophisticated and growing city like Perth to provide modern, high-quality cultural facilities for locals and to attract people to come and live in WA."

Minister Day said the venue would be a world-class linchpin in the revitalisation of Perth Cultural Centre, acting with the planned Northbridge Link as a gateway between the city and its entertainment precinct, stating "this is a very much needed addition to the cultural scene in Western Australia.

"The desire for a new drama theatre in Perth has been on the agenda for the past 30 years and it is to the credit of the previous government that the decision was made to go ahead in 2004."

The building will house the Black Swan State Theatre and Perth Theatre companies.

The two companies had been discussing a merger ahead of moving in next year but shelved talks in 2008, citing sponsorship and box-office uncertainties after the global financial meltdown.

Working out of the same venue may increase the pressure on the two companies to merge.

Bonney stated "build it and they will come for 18 months and then it is our job to make sure they keep coming."

Designed by Kerry Hill Architects and being built by John Holland, the venue replaces the Playhouse Theatre, whose lease from the Anglican Church expires at the end of next year.