Oman Aquarium opens within the Mall of Muscat 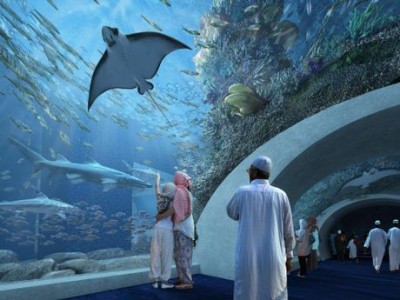 The Middle East’s largest aquarium, Oman Aquarium, located inside the Mall of Muscat at Mabela, has officially opened. The Aquarium’s focus is on marine conservation and education and enriched entertainment experiences for visitors.

According to the Oman Ministry of Tourism, the Mall of Muscat, built by Al Jarwani Group, underlines the initiatives of the government towards providing various leisure facilities towards boosting tourism in the Sultanate.

The Omani Government has been making serious efforts to develop various leisure options for tourists other than the pristine beaches and mountains. According to Oman Tourism, Oman Aquarium is only the beginning with more development expected in the coming years.

The 200,000 metre² mall is designed to accommodate around 60 million visitors per year.

According to the Observer, Mohammed al Jarwani, Chairman of Al Jarwani Group, said years of planning were required for the development of the project to this scale and make it operational.

Lee Northmore, Director of Retail and Mall Operations, avdised "spread over 8,000 metre² of the total Mall of Muscat area, Oman Aquarium will be home to 30,000 species of marine animals.

“To begin with, there will be 12,000 species including 200 varieties from the seas near Oman. In the seas of Oman, there are thousands of local species and we want to focus on them.

“The project, based on Omani sailor Ahmad bin Majid’s Voyage of Discovery, will have sharks, octopus, turtles, and penguins on display. There is a lot of passion that has gone into the project and it is based on a very local Omani story. This is a live ecosystem which will be developed over a period of time."

The aquarium requires three million litres of water. Water was sourced from the sea taking 65 tankers to fill up the aquarium. The entire amount of water will be phased out during the course of a year.

Mall of Muscat will also offer a snow park, Novo Cinema with 14 lounges and over 200 retail outlets. Unlimited Snow signed a joint venture agreement for the operation of the Snow Park which will span over 5,600 metre² on the third level of the mall and is expected to open in December 2019.