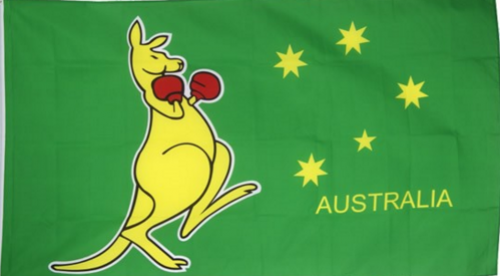 Australia has defied "ridiculous" orders to tear down a large 'Boxing Kangaroo' flag at the Winter Olympics athletes village in Vancouver over trademark rules.

Australian Olympic Committee spokesman Mike Tancred said the iconic flag was still flying from the team's windows despite verbal instructions to remove it because it is a registered trademark.

Tancred told AFP by phone from the Canadian city "the flag is still up, we haven't moved it.

"They told us to take it down and we haven't."

The International Olympic Committee (IOC) told Australia to remove the flag on Monday because it is a registered trademark, which violates Games rules.

Tancred said the image, which has been displayed at previous Games, was the team's mascot and was also used to promote Olympic ideals to school children, adding "we would hope the IOC would support us."

"The Boxing Kangaroo is a symbol of the team but it's also used in the education of young kids about the Olympics."

The Deputy Prime Minister told the Nine Network TV station "I think we want to see a lot of the Boxing Kangaroo, particularly now that we've had this ridiculous ruling."