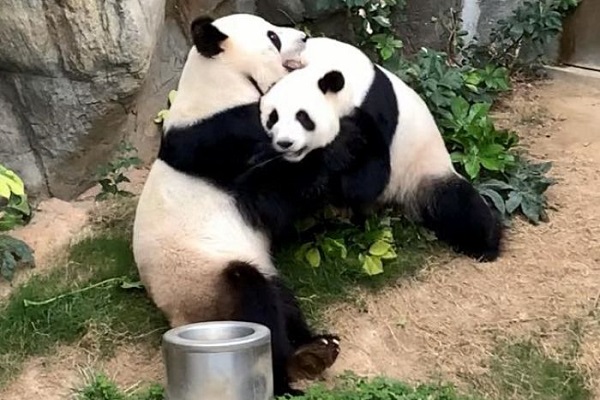 After 10 years of attempts at having its giant pandas mate, Ocean Park Hong Kong has advised that, with the attraction now closed to the public due to Coronavirus restrictions, the pair have decided to make the most of their newfound privacy.

With Ocean Park first encouraging "natural mating” between Le Le and Ying Ying 10 years ago, staff have reported that the duo began leaving "scent markings" around their enclosure last month, the first signs of the animals mating ritual.

In a statement, Michael Boos, Ocean Park’s Executive Director in Zoological Operations and Conservation, advised “since Ying Ying and Le Le's arrival in Hong Kong in 2007 and attempts at natural mating since 2010, they unfortunately have yet to succeed until this year upon years of trial and learning

"The successful natural mating process ... is extremely exciting for all of us, as the chance of pregnancy via natural mating is higher than by artificial insemination."

According to Ocean Park, the pair began "spending more time playing in the water" and leaving "scent markings" around their enclosure towards the end of March, coinciding with the beginning of the panda mating season, which lasts until May.

If successful, Ying Ying could show signs of pregnancy as early as late June - although Ocean Park notes that she could also experience a "pseudo-pregnancy".

Boos added “we hope to bear wonderful pregnancy news to Hong Kongers this year and make further contributions to the conservation of this vulnerable species.”

Boos highlighted that the chance of pregnancy via natural mating is higher than by artificial insemination.

According to the World Wildlife Organisation, there are just over 1,800 pandas left in the wild.