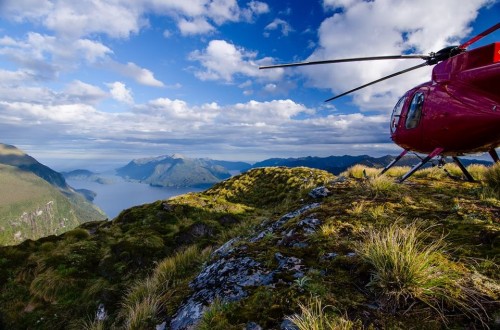 The New Zealand Recreation Association (NZRA) has expressed concern about the Department of Conservation’s decision to increase the number of helicopter landings in Fiordland National Park, to cater for growing tourist demand.

Federated Mountain Clubs has also commented on the recent move, saying DOC had made a unilateral decision to override the statutory limits for aircraft landings outlined in the Fiordland National Park Management Plan, after closed-door discussions with the aviation industry.

NZRA Chief Executive Andrew Leslie also questioned the lack of consultation, saying the value climbers and other recreationalists placed on the area’s quiet atmosphere and wilderness characteristics seemed to have been disregarded.

Leslie stated “DOC has allowed for a huge increase in helicopter landings on Mt Tutoko’s Ngapunatoru Plateau, previously forbidden by its own management plan.

“The Fiordland National Park Management Plan was crafted over several years and was widely consulted upon by recreationalists, conservationists, iwi and commercial operators. Strict statutory limits were applied to achieve a balance of everyone’s interests. This seems to have been overruled.”

Under DOC’s plan, the glacier, part of the Ngapunatoru Plateau, is considered a high use site for glacier landings and back-country ski access and climbing. The management plan states that the area “will be managed primarily for the remote climbing opportunities it provides”.

Despite this, DOC has agreed to increase helicopter landings at the site for a 12-month period in a decision it claims factors in growing demand from tourism operators and the impact on recreational users and the environment.

Leslie questioned whether the right balance had been met, adding “the Conservation Act explicitly sets out a requirement to foster recreation on public conservation land, whereas allowing for tourism must be more carefully weighed.

“NZRA recognises that a vibrant and responsive tourism industry is essential for the economic wellbeing of New Zealand and that most of the time recreational and tourism interests are closely aligned. But tourism and conservation rely upon broad societal agreement over tourism’s impacts and trade-offs.

“Whenever decisions like these are made, it can be difficult to find the right balance between the needs of tourism on the one hand, and the needs of users and the environment. This is why it’s crucial to consult with all relevant parties.”

Federated Mountain Clubs has said it will appeal to the Ombudsman.