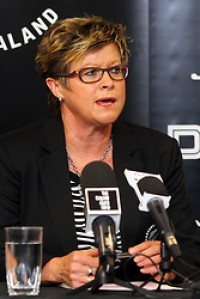 The New Zealand Olympic Committee has named a new Secretary General to lead Olympic and Commonwealth sport into the new decade.

Kereyn Smith will be the first woman to lead the organisation and brings with her more than twenty years in sport leadership and governance both at both a national and international level.

"Kereyn is both highly qualified and a motivational and inspirational leader (and with) high performance sport in New Zealand undergoing a period of review and change and Kereyn is the ideal person to provide the strong strategic direction necessary at this time.

"Kereyn will maximise the value the New Zealand Olympic Committee adds to sport, athletes, commercial partners and all New Zealanders."

Smith, the current Chief Executive of the Academy of Sport South Island and the vice-president of the International Netball Federation will work at both a national and international level to advocate on behalf of New Zealand athletes and sport.

Smith, who will take up her role in January, just 18 months out from the London Olympic Games, stated "I am honoured to be appointed to the role of Secretary General (and) I am also acutely aware of the very real challenges that lie ahead.

"With less than two years to the London Olympic Games, a dynamic and changing high performance landscape, and the ongoing need to secure the necessary financial resources to add value to sport and athletes, it will certainly be a testing time.

"Kiwi athletes have unreasonable ambition and expectation that they will take on the best in the world and succeed, this means sports organisations and their leaders must also step up their pace.

"I'm excited to be part of this drive for success."

Smith also believes sport plays an important role in society and will look to further develop a series of programmes that inspire school-age children to take up sport and, in doing so, become the best they can be.

Acknowledging the organisationâs aggressive financial targets (the NZOC receives just 7% of its annual revenue from government) Smith added "in order to deliver consistently high performance environments at Olympic and Commonwealth Games and to on behalf of athletes in New Zealand, financial security is crucial."

Current Secretary General Barry Maister, who has held the position since 2001, will step down on December 31st 2010.

Maister was appointed to the IOC earlier this year and, as such, will continue to sit on the New Zealand Olympic Committee board.

Smith will be the tenth Secretary General of the New Zealand Olympic Committee. The organisation was inaugurated on 18th October 1911 and will celebrate its centenary next year.

For more information go to www.olympic.org.nz/