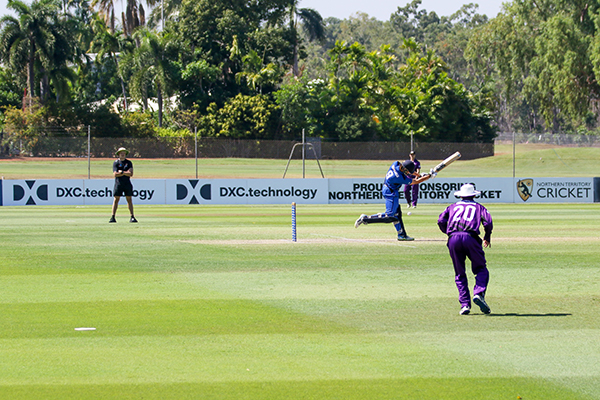 As part of a new agreement, DXC Technology is to become NT Cricket’s inaugural Premier Partner and Naming Rights Partner of Marrara Cricket Ground, which sees the home of cricket in the Territory renamed as DXC Arena.

NT Cricket and DXC Technology announced this expanded long-term partnership, building upon a successful relationship which began in 2019.

As the world’s leading independent, end-to-end IT services company, DXC Technology is no stranger to cricket in the north as, in addition to its existing partnership with NT Cricket, they have been a strong local supporter of the Nightcliff Cricket Club for the past three seasons.

The expanded partnership between DXC Technology and NT Cricket is heavily focused on supporting the development of Territory players along their entire cricketing journey, with support to be provided to junior club coaches in Darwin and Alice Springs, as well as players within NT Cricket’s academy, Strike League and Northern Territory representative programs.

As part of its broader Northern Territory Advancement Plan, DXC will establish a centre of excellence in the NT as a hub for innovation, skills development and delivery of services. The centre will see DXC create multiple talent pathways which includes partnerships with schools, vocation and tertiary institutions as well as the launch of diversity and social impact programs within the NT community.

Commenting on the partnership with DXC Technology, NT Cricket Chief Executive Joel Morrison advised “DXC Technology have been a valued partner of the local cricket community for the past three years and we’re thrilled to commence an exciting new chapter together. Our expanded partnership will significantly support the development of cricket throughout the Northern Territory, helping young girls and boys realise their potential and achieve their dreams.

“Our partnership will be crucial in advancing NT Cricket’s aspiration of ensuring the Territory becomes a destination of choice, transforming our community into the Home of Winter Cricket.”

Commenting on its commitment to the Territory, DXC Technology Asia Pacific Managing Director, Seelan Nayagam notes “DXC Technology is committed to the Territory and thrives on helping businesses realise the full potential of technology, so we’re excited to continue our work with NT Cricket to transform the Territory into the Home of Winter Cricket. Both our organisations share a vision of growth and inclusion for the Territory – one that encourages greater indigenous participation, drives the development of innovation and skills, and helps communities build new talent pathways.”

“We look forward to providing Territorians with the full benefits of our global scale, expertise and supplier partnerships through our technology operations hub which will create career opportunities for skilled workers.”

For more information on DXC Technology go to www.dxc.technology