NSW Premier Baird threatens to shut down festivals over drug use 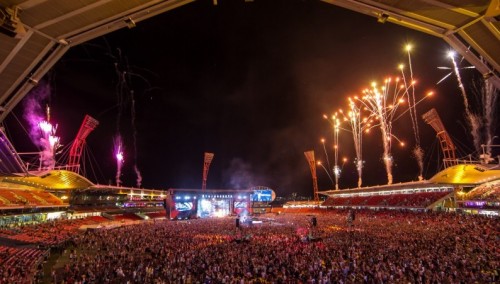 NSW Premier Mike Baird has threatened to shut down music festivals which don’t improve their safety standards after an “unexpected level” of drug-related festival deaths.

The NSW Premier put music festival organisers 'on notice' to improve their record in discouraging drug use after a 23-year-old woman was taken to hospital in a critical condition after allegedly taking MDMA at Sydney’s New Year’s Day festival Field Day.

This followed fatal drug overdoses at Stereosonic events in Sydney and Adelaide in late November and early December.

With a large number of arrests for drug offences at New Year's Day music festivals around Australia, 184 festivalgoers were charged for drug possession and supply at the Field Day event

In addition, 212 people received medical treatment from Paramedics at the 28,000-strong event and five attendees had to be taken to hospital for further treatment.

Premier Baird told News Corp Australia that he will call on “relevant ministers” to bring in more drug screening at festival entrances, and to also review the system which issues permits for such events, stating “individuals need to take responsibility for their actions, but so do the organisers of these festivals.”

Premier Baird says music festivals which don’t comply with new requirements introduced by the Government would be shut down, commenting “if new rules and procedures place additional burdens and costs on organisers, so be it - and we will also examine denying permits to organisers who have not done the right thing in the past

“Enough is enough. This simply has to stop.”

According to the report, the NSW Premier vowed to close down festival organisers who did not comply with stricter rules.

New Year's Day festivals around Australia included three Falls Festivals in NSW, Victoria and Tasmania; Lost Paradise in NSW; Beyond The Valley in Victoria and Southbound in Western Australia.

Organisers of the Byron Bay Falls Festival, which began on New Year's Eve, said on Friday there were no reported police incidents and the number of people seeking help from paramedics was down 50%.

The almost 200 charges at Field Day comes as a number of drug experts, academics and advocates push for Australia to trade its zero tolerance approach for harm minimisation by legalising pill testing and drug checking facilities at recent festivals.

In December, 83%  of over 10,000 responses to a Music Feeds poll were in favour of Australian festivals introducing drug testing procedures for ticket-holders. Since then, drug experts have discussed what it would take for Aussie festivals to implement effective drug testing.