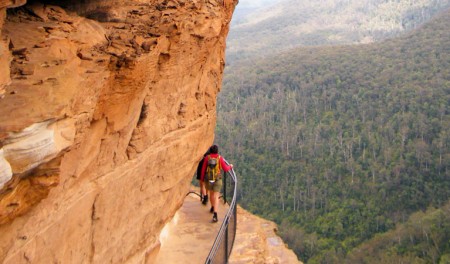 Imagery from the Blue Mountains National Park west of Sydney is now available on Google Street View in a move that is seen as further opening its diverse landscape to a global audience.

NSW National Parks and Wildlife Service (NSWPWS) has also mapped the Ben Boyd, Yuraygir and Gundabooka National Parks, meaning there are now 25 parks across the State with Google Street View.

“The panoramic views allow park visitors to research tracks and plan their hikes, while hikers who aren’t able to physically get to a section of a national park can now see lookouts, valleys and gorges via Google Street View.

“Some sections of parks with delicate ecosystems that are closed off to the public have also been carefully mapped, opening up new ways to have an interesting park experience.”

A team of two trekkers walked hundreds of kilometres mapping out a park with a 19 kilogram backpack that creates a 360-degree photo by using 15 cameras, taking photos every three seconds. Other sections accessible by road are mapped using specially modified vehicles or boats.

Google technicians then receive the images and create high resolution three-dimensional images for every step of the park that has been mapped.

Minister Speakman believes that the NSWPWS is the first Australian organisation to partner with Google as part of the Trekker Loan Program and was eager to map more parks.

He adds "after the positive feedback and popularity of the 21 Google Street View parks launched last year, it was only fitting that one of the next to be mapped was NSW’s most visited and iconic – Blue Mountains National Park.

“There were almost 4.3 million visits to Blue Mountains National Park in 2014, making it one of the state’s most popular national parks.”

Program Manager for Google Earth Outreach, Karin Tuxen-Bettman hoped the new Street View imagery of the Blue Mountains and other NSW national parks would inspire explorers from Australia and around the world to take an active interest in visiting these parks.

Tuxen-Bettman concluded "by loaning Trekker equipment to organisations like NSWPWS, we can capture images from new locations more quickly, and share more of Australia’s beautiful landscapes with the world."

The Street View imagery is available to the public via the NSW National Parks website and Google Maps.

For more information go to www.nationalparks.nsw.gov.au/google-trekker