NSW Government to back rail trails 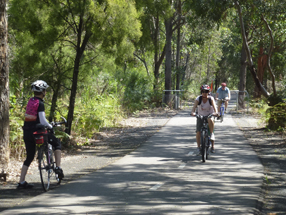 Moves to save old railway lines and infrastructure from rusting into oblivion by turning them into sustainable tourism attractions look set to get backing from the NSW Government.

Rail trails – projects that will see disused railway lines turned into paths for walking, cycling and horse riding – have been developed in Victoria over recent years with the State having 800 kilometres of rail trails up and running.

Among several planned projects are a rail trail between Casino and Murwillumbah while a community group wants to turn a 58 kilometre section of the closed railway line corridor between Molong and Yeoval into another rail trail.

The Molong to Yeoval line was opened in 1925 and closed in 1991 and since then sections of it have been removed. However, the route passes interesting scenery including 90 year old railway buildings and bridges.

Currently the range of rail trails in NSW is limited to a few short trails in the Blue Mountains and Newcastle areas, and a 20 kilometre from Parramatta to Liverpool in Western Sydney.

Several communities in country areas are pushing for the development of long rail trails. However they have a challenge unique to NSW in that rails remain on many closed lines in the state, because an act of parliament is required for the line to be officially closed, thus allowing the land to be used for other purposes.