The NSW Government has announced plans to invest more than $1 billion in the development and refurbishment of sports stadia across metropolitan Sydney, with a new 30,000 seat stadium at Parramatta set to be the first project to be delivered as part of the package.

Described as the biggest investment in sport and major event infrastructure in NSW since the 2000 Sydney Olympics, NSW Premier Mike Baird and Minister for Sport Stuart Ayres today (4th September) announced that $600 million has been set aside for the decade-long plan within the Rebuilding NSW initiative while the NSW Government will provide a further allocation of funding to complete the projects.

Announcing the funding, Premier Baird stated "a global city like Sydney needs world class sporting venues and this investment will ensure fans and sporting teams have the facilities they deserve.

“Our first priority is building a new 30,000 seat stadium at Parramatta on the site of the existing facility, with work to begin as soon as possible and construction expected to be completed by 2019.

“This huge investment in our stadia will boost our capacity to attract big ticket events to NSW, as well as create and support thousands of jobs.”

The investment in the state’s major stadia network includes:

Minister Ayres said NSW needs a mix of contemporary venues of varying sizes so we have options to bid for and host a wider range of events, stating “the upgrades are contingent upon final business cases, design work and the NSW Government reaching content agreements with the sporting codes to ensure matches are spread across the stadium network.”

Explaining that, if negotiations are successful, Minister Ayres added “once this is finalised we will work towards one governing entity for Sydney’s stadia network.”

In practice this is likely to see the creation of a newer ‘super agency’ to manage stadiums in Sydney, Wollongong and Newcastle with the functions of the Sydney Cricket and Sportsground Trust merged with Venues NSW and the management of ANZ Stadium. 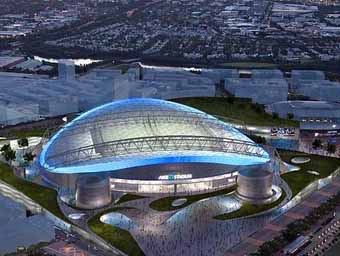 ANZ Stadium Managing Director Daryl Kerry, confirmed these discussions were ongoing while congratulating “the NSW Government for its vision and commitment to invest in the State’s sporting and entertainment infrastructure.”

“The NRL has worked closely with the NSW Government over many months to secure better facilities for fans – and this is just what we need.

“It means we will have a world class stadium at Parramatta - right in the heart of western Sydney."

Images: The most recent plan for an update of Parramatta (Pirtek) Stadium (top) and plans for a roof on ANZ Stadium (below).