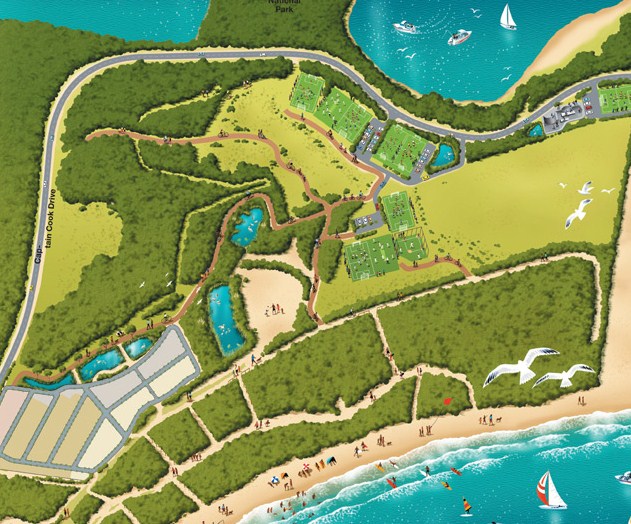 Australand and Breen Holdings have received the green light from NSW Planning Minister Tony Kelly for the rezoning of 130 hectares of land near Wanda Beach making way for a major residential housing subdivision and associated recreation areas and sporting facilities that will provide Sutherland Shire Council with 90 hectares of new parkland including ten new playing fields.

Sutherland Shire Mayor Councillor Lorraine Kelly welcomed the decision as another milestone toward development of the project which would add about 420 new water-friendly homes to the Shire and ten new community-owned playing fields, a skate park and other facilities worth up to $25 million. The development will also provide 49 hectares of parkland in addition to 42 hectares already committed as open space.

Mayor Kelly stated "I welcome the news that the Minister has now approved this development.

"There will be long-term benefits for the Shire (with) a large portion of the site (to) be returned to council for public open space (as) the developers will build sports fields and a skate park as well as other community facilities for all to enjoy."

Sutherland Shire Council signed a Voluntary Planning Agreement (VPA) with Australand-Breen in May after two-and-a-half years of negotiations. Under the agreement three-quarters of the site will be transferred to council as public open space with the land owners meeting the $25 million cost of the new playing fields and associated facilities.

Stephen Bourke, the Council's Director of Community and Recreation added that "these new playing fields will be a welcome addition to the council's recreational facilities which are already at near capacity. They will allow us to better maintain the condition of existing fields by reducing the load on some of our heavy use areas."

Australand Managing Director Bob Johnston believes the re-zoning is a positive outcome, allowing for sustainable re-development and much needed housing stock while also providing a lasting social dividend for the community.

Johnston explained "this re-zoning provides a unique resolution to the difficult planning issues that have endured on the Kurnell Peninsula over the past two decades, following the cessation of sand mining on this land.

"It will enable rehabilitation of major tracts of land and create a permanent green corridor stretching from the Towra Point Nature Reserve to Wanda Beach which will be enjoyed by generations to come."

Breen concluded "Australand and Breen Holdings will build recreation facilities with an estimated value of $25 million, including 10 playing fields, associated amenities, a skate park, walking and cycling tracks, parklands and picnic facilities with commanding views to the ocean and Botany Bay. We hope to complete the first playing fields in 2012 with the entire project targeted for completion in stages over the next eight to ten years

"Once completed the 91 hectares of open space will provide local residents and other Sydneysiders with a unique development of parklands and recreation facilities three times the size of the Royal Botanic Gardens and almost half the size of Centennial Park."

Both Breen and Australand will now commence the process of lodging Development Applications with Sutherland Shire Council to enable residential subdivision and the construction of the playing fields, parklands and associated community facilities.

In the second stage four more playing fields, including a baseball facility, will be developed together with an amenities building and car park for 112 vehicles. In the third and final stage three more fields will be developed with a 176 bay carpark.

As security the land owners will lodge bank guarantees to the value of $25 million which can be called upon by Council to complete any outstanding work should the developers fail to carry out the work specified in the VPA.