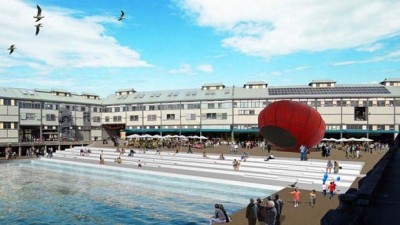 NSW Deputy Premier and Minister for the Arts Troy Grant announced that the award-winning architectural firm will lead the design for the new precinct, which obtained concept approval in May last year.

Minister Grant explained “selection of the lead architect is a milestone in Walsh Bay’s rejuvenation for the enjoyment and entertainment of people from Sydney, across NSW, and international visitors.

“The Walsh Bay Arts Precinct will be a vibrant cultural hub that will accommodate arts festivals and events, and we want its design to make best use of its unique waterfront and heritage setting.

“Tonkin Zulaikha Greer will coordinate design across the precinct which will have new and refurbished performance and rehearsal spaces, offices, workshops, food and retail outlets including restaurants and bars, and a new public square.”

Tonkin Zulaikha Greer Director Peter Tonkin said the firm is excited to be involved with the spectrum of arts organisations in Walsh Bay and to be working to create a landmark waterfront collection of creative activity.

Tonkin added “just as the Opera House had a profound impact on the fabric of Australian arts and culture when it opened in 1973, we expect Walsh Bay to become a distinctive and accessible public celebration of the arts in Sydney and NSW.”

The architect was chosen through a select tender process and will work with resident Walsh Bay arts companies to deliver spaces that will support world-class productions and memorable experiences.

The Australian Chamber Orchestra, Bangarra Dance Theatre, Australian Theatre for Young People, Bell Shakespeare, Sydney Dance Company and Sydney Philharmonia and Gondwana Choirs have made long-term commitments to the redeveloped Walsh Bay Arts Precinct. All companies will work together to activate the precinct, alongside the Sydney Theatre Company.

The NSW Government has set aside $139 million for Walsh Bay’s renewal.

Image shows the concept for the Walsh Bay precinct.