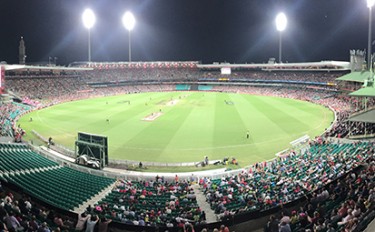 The biggest cricket crowd of the Sydney summer - and the largest to ever watch a domestic cricket match in NSW - cheered the Sydney Sixers to a thrilling final ball win against cross town rivals, the Sydney Thunder on Thursday night (22nd January).

The match, which also marked the farewell SCG appearance for Brett Lee, attracted a crowd of 36,487.

Sixers rising star Jordan Silk set up the final ball win with a career best 69 not out from 43.

The Sixers will travel to Adelaide for the BBL semi-final against the top-placed Strikers tomorrow (Saturday 24th January).

The crowd was the largest for a domestic match at the SCG since 1934, when 32,587 attended the final Sheffield Shield match of the season to watch Sir Donald Bradman, Bill O’Reilly and their cohorts take on Victoria.

The BBL crowd also comfortably passed the day one crowd of 30,161 at the rescheduled New Year’s Day Test match between Australia and India.

The SCG is also set to host five 2015 ICC Cricket World Cup fixtures from 27th February, including a quarter-final on 18th March and a semi-final on 26th March.