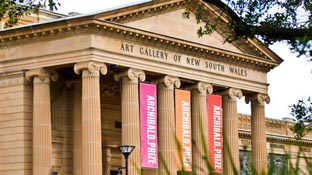 The Sydney Morning Herald report shows that Aboriginal and Torres Strait Islander people made up just 0.5% of the Art Gallery of NSW's workforce in 2014, far below the benchmark of 2.6%. The figures provided by the Gallery also revealed the situation had worsened since 2012, when indigenous people made up 1.2% of its workforce.

The Gallery also reported declines in the employment of people with disability and from a non-English-speaking background.

Commenting on the figures to the Sydney Morning Herald, Gallery spokeswoman Natasha Henry stated "the Gallery is committed to a diverse and inclusive workplace and we work within New South Wales state government framework to work towards achieving EEO (equal employment opportunity) targets."

The Sydney Morning Herald also reported on other cultural institutions with similar underachievement in workplace diversity figures in their latest annual reports.

However, the Opera House has several plans to boost workplace diversity, including an indigenous internship program, according to spokeswoman Kate Huish.

Huish told the Sydney Morning Herald “the Opera House has a high number of women in leadership roles," referring to Chief Executive Louise Herron, along with the Opera House’s head of security, general counsel and company secretary.

The Museum of Applied Arts and Sciences, which includes the Powerhouse Museum, is also led by a woman – Rose Hiscock – and reported 53% of its staff were women in its 2014 annual report. The 17% of MAAS staff whose first language was not English came close to the 20% benchmark but only 1% were indigenous and 7% were people with disability.

Diversity in government sector workforce management continues to be a priority under legislation, according to a spokeswoman for the NSW Public Services Commission, Orietta Melfi.

Melfi stated “a diverse workforce which is free from discrimination and which reflects the diversity of the broader NSW community is an important factor in the delivery of high-quality services."

Melfi added that agencies must collect and report statistics for employees in diversity groups and report on achievements and strategies. However, she did not say whether the failure to meet targets for workplace diversity had ramifications for agencies.

Three-quarters of the workforce at Destination NSW, the NSW Government's events and tourism agency, are women, according to its annual report. But the agency reported no Aboriginal and Torres Strait Islanders or people with disability among its staff for the third consecutive year.

Destination NSW spokeswoman Holly Hearne said the agency had a range of workplace diversity initiatives and had appointed its first Aboriginal trainee in 2014.

Hearne told the Sydney Morning Herald "it is important to point out that the collection of diversity data is not always fully reflective as it's up to the individual to identify as part of the recruitment or induction process.

"This makes it difficult to record a true representation of employees of indigenous and multicultural backgrounds and those with disabilities."