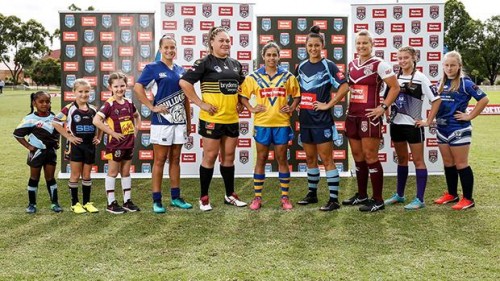 In the wake of significant growth in women's rugby sevens and the success of the AFL Women's competition, the NRL has announced moves towards establishing a national women's rugby league competition, with NSW and Queensland joining forces to promote the game from juniors to the elites.

Unveiling what will be an unbroken pathway from under 6s through to open representatives in both states, NRL Chief Executive Todd Greenberg said the new structure would improve the standard of women's rugby league as well as encourgaing increased participation.

Looking to the long-term, Greenberg stated "you don't have long-term sustainability unless you have a pathway from the bottom all the way to the top."

Previously, girls have often had to move away from rugby league in their teenage years, as there are limited competitive opportunities between the ages of 12 and 17.

Unlike NRL, the AFL has had strong state-based competitions for decades, meaning there has always been a strong pool of talent to build the AFLW.

The NSW and Queensland rugby league competitions for women are not as developed, so at this stage, the NRL would not be able to implement a similar model.

NSWRL Football General Manager BJ Mather said building a healthy pathway through the state competitions would result in a higher standard and quality of competition.

Mather told the ABC "ultimately we are building towards a state-based semi-professional women's competition in the next three years to provide players the opportunity to get used to playing that level of competition regularly."

Earlier this year, Greenberg said the league was focused on building the women's game from the ground up, with hopes of having some form of national competition in place in the next three to five years.

He said the NRL would not rush a women's league despite the success of the AFL Women's competition.

Harvey Norman Chief Executive Katie Page said the company was committed to supporting the development of female player pathways at all levels of rugby league, stating "the next generation of female players, those coming through these newly formed ranks, will take women's rugby league to the next level."

Image: Harvey Norman is backing the NRL's new female player pathways across all levels of the sport.