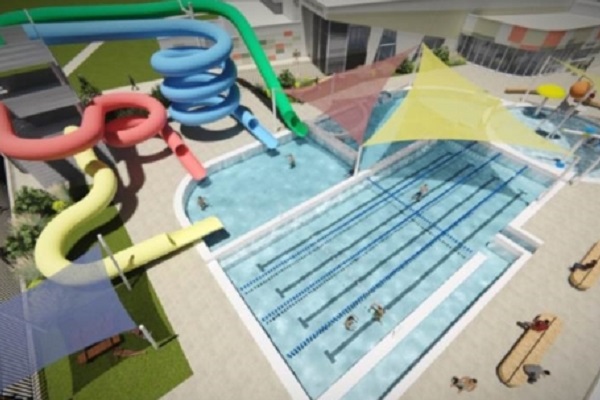 Being built next to the Northam Recreation Centre, the new facility will including a 50 metre heated pool, leisure pools, waterslides, new changing facilities and barbeque areas.

Replace the current Northam Olympic Pool, work is being undertaken by developers Cooper and Oxley with aquatic installations delivered by Commercial Aquatics Australia.

Shire of Northam Chief Executive Jason Whiteaker told local newspaper the Avon Valley Advocate that works are progressing at a promising rate, commenting “all the ground works have been completed with drainage, piping and general set out.

“The swimming pools have basically been formed and the building shells have also been erected recently.

"The slides were delivered on site last week, whilst the small extension to the administration area was completed two weeks ago and signed off."

He advised that the aquatic centre would complement the already existing skate park and recreation centre, adding “we are looking at a range of options to connect this area to the youth space.

"These designs will be finalised in the coming six to eight weeks.

"The youth and family space has been a great success and has provided a real focal point for families and young people.

"Once the aquatic facility development has been completed the precinct will be a significant asset for the community and the region.

"Once works have been finalised on the aquatic facility the focus will turn to remediating Jubilee Oval so it can be once again used not only for football, but as a general community open space."

The new development Chief executive officer Jason Whiteaker said the new aquatic facility development will be delivered at a greater overall cost than was originally projected, the net financial impact to Council will be $570,000 more than its budget.

Northam is located in the wheatbelt region east of Perth.