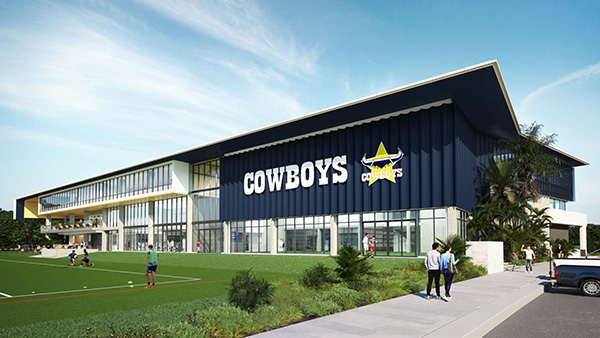 The centre was built with $15 million support from the Australian Government and through a $20 million loan from the Northern Australia Infrastructure Facility (NAIF), as well as $5 million from the Queensland Government.

Federal Minister for Resources, Water and Northern Australia Keith Pitt attended the opening and said the new facilities ensured the Cowboys had access to the best possible training facilities, which would also be available to other teams and the Townville community.

Minister Pitt noted “I’m delighted to help celebrate the opening of the Community, Training and High-Performance Centre, which will be home for the Cowboys, and used by other local sports teams, and by teams all over Australia who need to train for tropical conditions.

“Sport is an important part of Australian culture and is a crucial contributor to our communities, particularly in regional Australia. This new centre will be an important facility for communities across north Queensland.

“James Cook University will host a sports science facility in the new centre, which will become a hub for sports medicine and sports science and research.”

Harper added “this three-level precinct is a game changer for the Cowboys, giving them high-performance training facilities to rival any in the country while helping the club retain and recruit talent.

“There is an indoor multi-use synthetic turf training field which is convertible to a hard-court sports floor, a basketball court and gym overlooking the main training field.

Member for Mundingburra Les Walker said Townsville City Council will be able to host events for the public at the community field next door and noted “this is a venue which can be used by the entire Townsville community, including leased tenancies within the building.

“The centre of excellence will attract more people and sporting teams to North Queensland and make the Cowboys a more enticing destination for players thinking about making the move north.

Federal Assistant Minister for Northern Australia Michelle Landry advised that the new centre was part of the Australian Government’s ongoing commitment to supporting northern Australia and the Townsville region.

Assistant Minister Landry added “the new Community, Training and High-Performance Centre will attract more athletes and teams to the north and provide lasting economic benefits to the city and local region.”

“There is growing demand among national and international sporting squads for access to quality, high-performance training facilities in the lead up to major competitions and events.

“The opening of the Cowboys’ High-Performance Centre is another important asset in the Palaszczuk Government’s continuing ‘targeted dialogue’ with the International Olympic Committee about Queensland as a potential host of 2032 Olympic and Paralympic Games.

“It makes Townsville an attractive option for pre-Games training for competitors not only preparing for a possible 2032 Queensland Olympics, but also Paris in 2024 and the 2028 Los Angeles Olympics.”

“We had a vision for a new home for our club beside the amazing Queensland Country Bank Stadium, and now seeing and experiencing that vision – the Hutchinson Builders Centre – every day is a wonderful privilege.

“The North Queensland Toyota Cowboys thank the Queensland Government, and all of our stakeholders, for their support in bringing this amazing facility to life.

“Just three months into our move into this state-of-the-art community training and high-performance centre, our elite training and sports science hub is taking shape, we have hirers from a range of industries taking advantage of the facilities, and we’re looking forward to hosting our first community event on the training field in June.

“The move has taken our team’s preparation and recovery to a whole new level, with the new indoor training area, multi-pool zone, sleep room and bespoke auditorium of particular significance, while the proximity to the new stadium means that training on our home ground is just a step away.

“We’re very excited for the club’s future in our new home and for the economic and social impact it can make for our community.”

Hutchinson Builders Chairman Scott Hutchinson said it’s exciting to open the Centre on time and on budget as they establish a 10-year partnership with the club.

Hutchinson added “we’re proud to lend our name to this prestigious new location and to show our long-term support for this powerhouse NRL club and their community vision.

“Hutchies has had an office in Townsville since 1987 and a long partnership with the Cowboys – it’s great to have had the opportunity to be part of this flagship sporting precinct.

“We wish the club and the team every success in their new home.”

The Cowboys have a long-term lease with Townsville City Council for use of the land, which includes use of the adjacent 12,000 square-metre community training field.