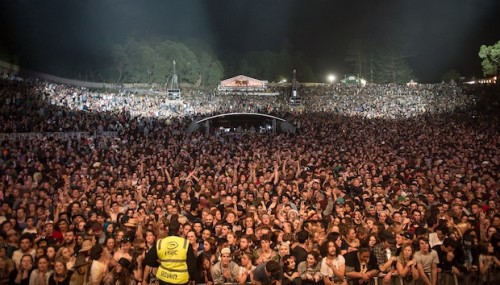 North Byron Parklands, the location for the Splendour In The Grass and Falls Festival, is fighting to secure its future as a live performance venue in the face of NSW Police concerns over the site's plans for expansion.

Now in the final year of operation under the current approval with the NSW Department of Planning and Environment, the Byron Bay venue is seeking to extend its trial period by 20 months to 31st August 2019.

The Parklands has also noted that the extension request comes in light of an upcoming assessment for a permanent application which is expected to extend well beyond the expiration of the trial approval.

Morris added “no other changes to either the Concept Plan or Project Approval are being sought.

"Importantly, event days and patron numbers would remain the same as currently approved, as well as all other existing consent conditions. The only change would be the trial period dates, essentially extending the trial period by an additional 20 months. With our current two events, this translates into 14 event days over the 20 month period.

"This application seeks to ensure that both Splendour in the Grass and Falls Festival Byron can operate while the State Significant application is processed by the DP&E (NSW Department of Planning and Environment). The proposed modification would address all relevant environmental and amenity matters associated with the trial period extension, and allow the continued monitoring of the performance of the events over this period."

However, NSW Police Tweed Byron Local Area Command (TBLAC) Brendan Cullen has raised concerns in a letter to the Department of Planning and Environment over the Parklands management's desire to increase their capacity from a maximum of 35,000 punters to 50,000.

Cullen wrote “at current levels of capacity TBLAC can not provide sufficient police to provide first response to the community at large and a satisfactory policing response to the festival," adding that, "significantly greater number of Police than currently deployed are required to maintain and ensure patron safety."

Cullen's letter also noted that a number of other factors including on site access, on stage lighting and traffic management would be too difficult to manage, as well as there being "no possibility of evacuating North Byron Parklands within eight hours at current capacity levels".

Splendour co-producer, Jessica Ducrou, responded to the NSW Police concerns, telling Echonetdaily “we spend a great deal of time in the planning of the event to ensure the safety of event patrons and staff. NSW Police have attended these meetings, and we have undergone a process of positive consultation with them in relation to crowd flows and general patron safety."

Morris also insisted that the Parklands has always worked closely with police and emergency services for their events.

She added “to this end we have undertaken many detailed incident simulation workshops with these agencies that strengthens the ongoing capabilities of each event's Emergency Management Centre.

"With the assistance of these key emergency service organisations all eight events held to date at Parklands have been conducted in a safe and responsible manner. Post-event debriefs with these agencies continue to provide valuable opportunities for improvement and we are grateful for the continuing support of these agencies."

The news comes as Falls Festival faces a class action lawsuit against fans who were injured in a stampede at the Lorne event last year.