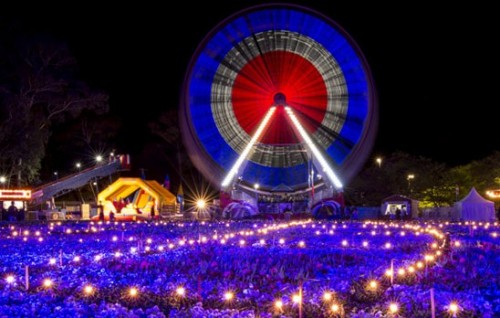 A floating floral sculpture projecting intense beams of light into the night sky featured as one of the highlights of this year’s Floriade NightFest.

Mercer explained “highlights of this year’s NightFest included over a thousand illuminated purpose-made ‘poppy’ lanterns, the event’s largest-ever sound and light show featuring dozens of searchlights and a beautiful floating water sculpture in the Nerang Pool.”

Neville added “over 75,000 floral LED lights have been hung to make up the stunning Cathedral of Light, and there are plenty of surprises around the park from swooping planes to visual games of Two Up, shimmering stars and nearly a thousand lighting fixtures creating a memorable atmosphere on, over and in the garden beds.”.

In addition to the stunning visuals, NightFest hosted to roving performers, a bustling night market and a fantastic line-up of entertainment with crowds entertained in The Comedy Cave by world-class acts Joel Creasey, Hannah Gadsby, Luke Heggie and Celia Pacquola.

For more information go to www.floriadeaustralia.com/nightfest