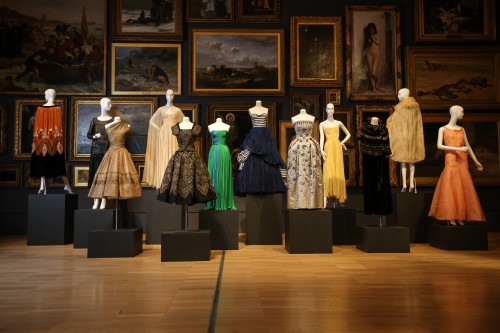 The National Gallery of Victoria has this week announced the acquisition of one of the world’s most sought-after fashion collections, which includes the most significant French haute couture ever to be acquired by an Australian museum, with works by Christian Dior, Coco Chanel, Vionnet and Jeanne Lanvin, and an outstanding fashion research archive including rare workbooks and photography by Yves Saint Laurent and Madame Grès.

Developed over several decades by Parisian collector and former Givenchy couturier Dominique Sirop, the $1.4 million Dominique Sirop Collection was purchased and generously donated to the NGV by major donor and NGV Foundation Board member Mrs Krystyna Campbell-Pretty in memory of Mr Harold Campbell-Pretty.

The 130 works in the highly-coveted collection represent more than thirty different fashion designers from 1800-2003 and has a transformative effect on the NGV’s Fashion and Textiles Collection. It includes a staggering 11 gowns by Christian Dior including a highly-prized couture dress from his first ever collection, as well as 12 exquisite works designed by Coco Chanel, including rare 1920s-era gowns, draped Grecian-style sheaths by Madame Grès and stunning examples from the father of haute couture Charles Frederick Worth.

Commenting on the acquisition, NGV Director Tony Ellwood stated "we are deeply grateful to Krystyna Campbell-Pretty for her extraordinary generosity and ongoing support of the NGV Collection.

"As the largest acquisition of French haute couture in the NGV’s history, this donation further cements the NGV’s Fashion and Textiles Collection as the most significant fashion collection in Australia."

"This gift, in his memory, is an outstanding opportunity to recognise both of these passions in honouring a most elegant man, a true gentleman.

"It would have pleased him greatly to know that such an important collection and archive are now with us in Melbourne, to be shared with the community. It is very satisfying to think that the exquisite beauty of these pieces can now be enjoyed by so many others."

Other pieces in The Dominique Sirop Collection include a feathered evening cape, embellished ball gowns and bias-cut silk sheaths by highly desirable and influential French couture designers, such as Elsa Schiaparelli, Paul Poiret, Jean Patou and Jeanne Paquin, the majority of which were designed between 1890 and 1960.

Collector Dominique Sirop acquired the first piece, a 1945 Paquin black wool dress, when he was 14 years old with money borrowed from his grandmother. Paquin holds significance to him as his mother modelled there for 6 years from 1946 until 1952 before she married.

He then collected the majority of the works in both the collection and archive from auction houses and specialist dealers in the US, France and London between 1989 and 2014, while assistant designer to Hubert Givenchy at the House of Givenchy and at his own couture house.