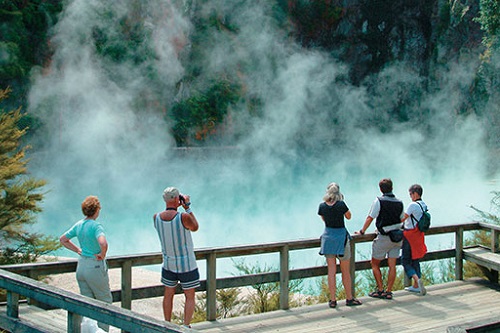 The possibility that New Zealand’s record-breaking tourism boom is set to slow down will be delivered at the annual Tourism Summit Aotearoa being held this week in Wellington.

International arrivals hit 3.9 million last year having grown 35% in the last five years, but that rate of growth has declined and could hit zero over the next two years, according to forecasts.

Speaking at the Summit, Tourism New Zealand Chief Executive Stephen England-Hall said the slowdown was a reflection of the global economy, advising “if you think about visitor behaviour, it’s a bit like a canary … it tends to react to the world around it pretty quickly and because holidays are a discretionary investment for most consumers around the world, when there’s less confidence or there’s less disposable income or they’re less certain about the future, then that shows up as a shift in travel pattern."

England-Hall said Tourism NZ was focusing its attention, resources and campaigns on Australia, China and the US which make up over half (58%) of the total arrivals and about 60% of total spending, advising “New Zealand is not the only country that’s trying to attract and win the hearts and minds and wallets of high-value international visitors and in fact that competition is going to increase whilst the global economy sort of slows down a bit. Because every single country will be looking to bring those high value visitors to their shores and making sure that they benefit from that."

Brexit and the trade war between China and the United States was adding to market volatility, with New Zealand Ministry of Business, Innovation and Employment Tourism General Manager Iain Cossar warning the tourism growth rate could drop to between zero and 2% in the next six to 24 months.

Also addressing the Summit, Cossar remained confident growth would return to 3% to 4%, adding "what we need to do as a country is to focus on that long term and to make the best of the short term impacts.

“Now, it’s unwelcome, but it is an opportunity to better prepare ourselves for that return to growth, maybe address some of the infrastructure issues and social license issues that the industry is facing here in New Zealand.”