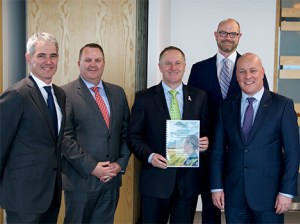 Four of New Zealand’s principal tourism leaders have released a report calling on the Minister of Tourism - one of the roles held by New Zealand Prime Minister John Key - to establish a $130 million annual fund to address the infrastructure challenges that tourism brings, particularly for regional communities.

Released today (2nd December), the report is the result of work commissioned by the Chief Executives of Air New Zealand, Auckland Airport, Christchurch Airport and Tourism Holdings Limited. It is intended to be an input into the government policy process and to provoke a conversation between the tourism industry, local and central government on investment in public tourism infrastructure such as car parks, sanitation and visitor facilities.

With the fast growing tourism industry already New Zealand’s largest, the group see that growth presents huge opportunities for New Zealand communities and that the challenges that come with growth need to be well managed.

Explaining that the tourism industry is committed to being part of the solution, Christchurch International Airport Chief Executive Malcolm Johns says “as the tourism industry grows it’s important that local public infrastructure keeps pace but we also need to be realistic about the ability of some local communities to fund the ongoing investment required.

The report suggests that Government and industry can work together nationally to create a fund to address the tourism infrastructure deficit.

In particular the report highlights that the Government benefits significantly from the tourism industry, not least from the estimated $2.8 billion in GST that tourists pay every year, and should invest alongside the tourism industry if the industry is prepared to contribute to a ring fenced and highly targeted fund to improve local tourism infrastructure.

The report proposes that a National Tourism Infrastructure Levy be created comprising of a 2% national bed levy across the accommodation sector and a $5 increase to the border levy which would raise $65 million per annum from the industry.

Matching funds from the Government would bring this to $130 million per annum to fund local tourism infrastructure needs. It also recommends that the fund have a formal review every five years to ensure the funds are being appropriately applied.

The proposal from the tourism industry leaders has been carefully designed to avoid the problems observed overseas, like with the Australian Passenger Movement Charge, where tourism taxes are used for general revenue purposes and disconnected from tourism.

The report also suggests ways that the funds could be allocated. Grant Webster, Tourism Holdings Ltd Chief Executive says, "By working together, industry and government could establish an independent entity that would bring greater discipline and commercial rigor to investment decisions than any of us could achieve on our own."

The move by the four chief executives has been backed by Regional Tourism Organisations New Zealand (RTONZ), with Chair Graham Budd, who is also Chief Executive of Destination Queenstown, commenting that while the growth of visitor numbers around New Zealand is very welcome, producing significant economic benefits for many regions, this remains unevenly distributed.

Budd explains “the needs of each region across the country are different when it comes to prioritising the range of tourism related services that communities must fund.”

However, RTONZ does not agree with some opinion regarding the perceived risks of introducing visitor levies and believes that many arguments do not hold up against the vast pool of international experiences.