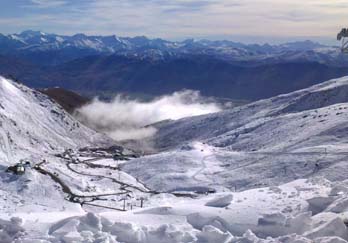 New Zealand looks set to enjoy yet another bumper ski season with fields having received fresh snow over recent weeks.

With resorts opening over the past weekend, and others set to open in the coming weeks, New Zealand’s alpine regions have been blanketed with snow over recent weeks.

Over recent weeks, snow falls and decreasing temperature in Queenstown, New Zealand’s ‘Adventure Capital' and the South Island’s premier ski destination, have given ski area operators a massive boost ahead of the new season.

The 2014 ski season will be officially welcomed in Queenstown with the start of the annual American Express Queenstown Winter Festival on 20th June. The multi-award winning festival (which runs from 20th to 29th June 2014) will celebrate its 40th anniversary with a series of landmark events - fireworks, live music, street parades, and comedy.

With four world-class ski areas to choose from, Queenstown and the nearby lakeside town of Wanaka are the biggest ski destinations in New Zealand. The Southern Lakes region is popular with Australian tourists, and the expected seasonal influx has prompted an allocation of 55,000 extra seats on flights from Australia to Queenstown during the winter season.

New Zealand’s southern ski fields are also a popular choice for many elite international ski and snowboard stars who dive down-under to continue their training over the northern hemisphere summer. Twenty-one of the freestyle athletes who trained last winter at Wanaka’s Cardrona ski area became Olympic medal-winners at Sochi.

A 45-minute drive from Queenstown, The Remarkables mountain range has received healthy snowfalls in recent weeks, as has Canterbury’s Porters Ski Area.

In addition, New Zealand’s ski resorts have been making multi-million dollar investments into snow guns to ensure that there is plenty of snow to enjoy.

The North Island’s two main ski fields, Turoa and Whakapapa, are set for a 28 June opening.

30th May 2014 - DEVELOPMENTS ON TRACK AT THE REMARKABLES SKI AREA