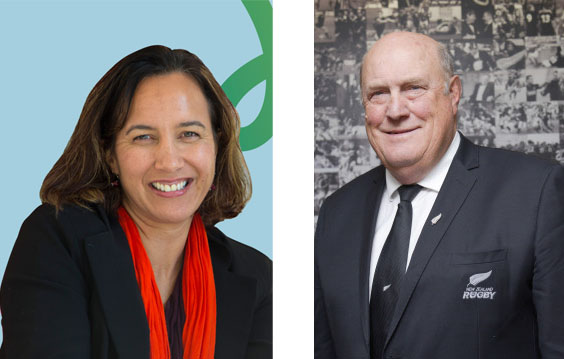 New Zealand Rugby has appointed Stewart Mitchell as its Chair with Dr Farah Palmer as his Deputy.

Mitchell succeeds Brent Impey, who stepped down after seven years in the role and provides a steady and experienced hand as NZR emerges from the COVID-19 pandemic and strives to reimagine rugby at all levels from participation to its financial model. Dr Farah Palmer is a former Captain of the Black Ferns, Associate Dean (Māori) for Massey Business School as well as Chair of the Māori Rugby Board and a Sport NZ Board Member.  She was appointed as the first woman Board Director of New Zealand Rugby in 2016 and is on the RWC 2021 committee.

An experienced strategic and business consultant with over 30 years’ experience in governance, Mitchell joined the NZR Board in 2014 after sitting on the Crusaders Super Rugby club Board since 2008 and serving as Chair of the Canterbury Rugby Football Union.

Mitchell said he was honoured to be elected as NZR’s Chair and noted “New Zealand Rugby sits at a critical juncture and I am excited at the opportunity to lead rugby into a new era alongside Farah who will be an outstanding deputy. Our game faces multiple challenges from the community game to the professional ranks and I can’t wait to address those challenges head on.

“It is an exciting and challenging time to be involved. I believe we have a unique opportunity to re-imagine rugby and to lead the world and innovate on and off the field. I’d like to acknowledge Brent [Impey] for his contribution to the Board, and personally for his support over the years.”

Mitchell, a New Zealand Colts representative in his youth, has an impressive resume having consulted and been involved in governance roles in the public and private sector for more than 30 years across a broad range of industries.

Dr Palmer adds “what a true privilege to be given this opportunity and I am excited at the prospect of working with Stewart in his new capacity as Chair as we work together to take the game into the future.  We have a strong and talented Board overall and I have no doubt we can achieve some great things for the whole game.”

Outgoing NZR Chairman Brent Impey welcomed Stewart Mitchell and Dr Farah Palmer’s appointment and advised “It’s a transformational time for rugby and Stewart and Farah are the right people to take us forward. Stewart has proven himself over a long period of time with Canterbury, the Crusaders and New Zealand Rugby where he has been an invaluable Board member and Farah with her current role on the NZR Board as well as Chair of the Māori  Rugby Board and the key role she is playing on the RWC 2021 committee.”

Mitchell acknowledged out-going Chair Brent Impey for his service and contribution to the game “on behalf of NZR, I would like to say thank you to Brent. He has guided the Board through some extraordinary times and always done so with passion and dedication. He has been a champion for diversity and a driving force behind many of our major milestones as an organisation in recent years.”

Impey said it had been an honour to serve the Board and added “Rugby has evolved massively in my time as Chair from grassroots to the professional game. At the community level we have seen a huge growth in women’s and girls’ rugby and ushered in the first generation of contracted professional players, which is transformational for our game.

“We have survived a global pandemic and emerged with a clear direction and healthy balance sheet and for that I’d like to thank my fellow Board members, NZR’s dedicated staff and the army of people who keep our Provincial Unions and clubs going. All of the work those people have done is what I have valued most during my tenure as Chair. I am looking forward to supporting Stewart in my final year as an NZR Board Director.”

Brent Impey joined the NZR Board in 2012, becoming Chair in 2014. His breadth of achievements as Chair have included the adoption of NZR’s Respect and Responsibility Review and the appointment of the Board’s first female and Pasifika Directors.

During his tenure, the All Blacks and Black Ferns won rugby World Cups in 2015 and 2016 respectively alongside World Championship wins for the All Blacks and Black Ferns Sevens. NZR revenue increased by more than $70 million, including growth in broadcasting revenue and he led the organisation through two constitutional reviews and the turbulence of the COVID-19 pandemic.