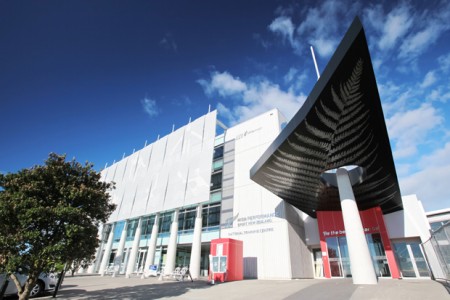 HPSNZ was established in August by merging SPARC's high performance unit with the two New Zealand Academies of Sport. Its new chief executive, Alex Baumann, was at the official opening. Baumann, one of Canada's greatest swimmers, was appointed recently and starts in January 2012.

New Zealand Sport and Recreation Minister, Murray McCully, says New Zealanders can look forward to seeing more kiwi winners on the world stage with the opening of the facility, stating "at the heart of the new organisation is a commitment to excellence.

"The whole team at HPSNZ is dedicated to providing the best support to New Zealand's elite athletes so that they can perform at their best and win for New Zealand.

"High Performance Sport New Zealand will have an annual spend of $60 million, up on $40m a year previously, and the government has committed just under $32 million to develop world-class training and competition facilities in partnerships with the private sector."

"Our belief is that this investment in facilities coupled with a dedicated high performance system with its focus on excellence will be the envy of other countries, will bring winning results which all New Zealanders can be proud of, and will inspire the next generation of elite competitors."

The New Zealand Government made a $15 million cornerstone investment in a more than $40 million redevelopment at the Millennium Institute of Sport and Health to provide world-class facilities for high performance athletes. These facilities include testing, training, treatment and recovery areas as well as HPSNZ offices and support areas.

The Government has also invested in regional high performance centres at Wellington and Dunedin, a national cycling centre of excellence which will be based at Cambridge and have operations for all Olympic bike disciplines, the high performance centre for rowing at Lake Karapiro, and an ocean water sports centre in Auckland. The government is also committed to providing high performance training facilities for Canterbury-based athletes.

Minister McCully also announced that to reflect the alignment of the sport system and HPSNZ, from next year SPARC will be known as Sport New Zealand.

Explaining the name change Minister McCully added "SPARC's strategic focus has changed in recent years and Sport NZ better captures this. Sport NZ will continue to invest in community sport and recreation and build capacity across the entire sector in its role leading the single sport and recreation system."