With the country predicted to welcome in excess of five million overseas tourists a year by 2024, New Zealand Tourism Minister Kelvin Davis has this week announced that a levy will be introduced for international visitors.

Speaking at this week’s TRENZ tourism industry trade show in Dunedin, Minister Davis commented "some people say (a levy will be) great, some people say it's terrible but the reality is that we're going to have 5.1 million visitors arriving on our shores in five years time and we need to find ways to pay for the infrastructure and everything they use.”

Minister Davis said the visitor levy will be in place by next year with details to be revealed in the coming weeks, adding "we are looking at a range of options, we have pretty much worked out a number of issues.”

Prior to the last election, the current Government promised to introduce a $25 head levy to deliver a $75 million-a-year Tourism and Conservation Infrastructure Fund to provide a "world-class experience" for tourists without burdening local communities.

However, he declined to comment on what funding could be in next week's budget for the Department of Conservation, which has seen a huge increase in its role maintaining public areas which are attracting tourists.

He added “one of our problems is that everything is free. We have to look at ways so that DOC is a bit more self sustainable as well.”

Minister Davis would not be drawn on whether that could involve DOC charging access fees for some areas but did not rule it out, stating “a lot of our attractions are free and we need to look at ways at making people pay their way, if they're going to use them and put pressure on the infrastructure.

"If you're going to go up a path that has cost the government a couple of hundred thousands dollars to build surely we can look at ways to maybe recoup the cost.'' 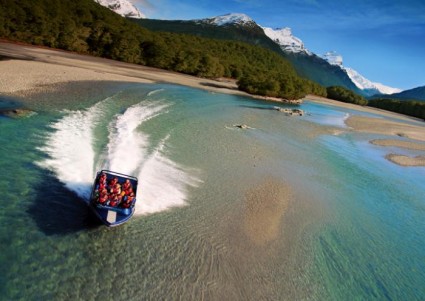 Foreign tourist numbers hit 3.7 million last year, up from 500,000 two decades ago, putting pressure on infrastructure, from toilets in small centres to the huts and walkways on DOC's world-famous walks.

Among organisations responding to Minister Davis’ comments, the New Zealand Recreation Association (NZRA) welcomed the introduction of a tourist levy.

NZRA Chief Executive Andrew Leslie highlighted the extent to which the tourism boom had placed pressure on recreational infrastructure and access, advising “it has been great to see an increase in visitors to New Zealand, in many ways, the tourism boom has enhanced recreation in New Zealand, but there have been associated costs and pressure points that need to be addressed.

“At the national level, the Department of Conservation has, almost by default, borne the burden. Funding for DoC has not been adequate to cope with the pressures placed upon their carparking, wastewater and recreational infrastructure. This has forced the department to make some very tough decisions between catering for international visitors and their core roles of conservation and fostering recreation.

“Our hope is that when funding for infrastructure is allocated, it is kept in mind that a huge proportion of international visitors come to connect with our natural places on land managed by the Department of Conservation.

“On a local level, the most popular areas for international tourists have the least number of ratepayers. That places an extraordinary burden on the local councils in those areas, who are struggling to maintain their walking trails and cycleways - let alone build more.

“Expenditure on recreational infrastructure such as walking trails and cycleways, is not just a coping mechanism for the tourism boom. It also enhances the lives of New Zealanders by way of the numerous social, economic and health benefits of outdoor recreation.”

Images: The popular Tongariro Alpine Crossing (top) and the Dart River Jet (below).