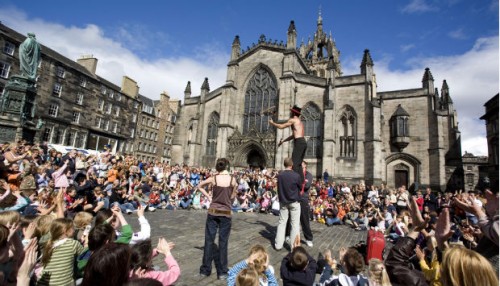 Six New Zealand arts practitioners will be attending the renowned Edinburgh festivals in August to pursue opportunities to present work and to build professional skills and networks as part of the festivals’ international delegate programme Momentum.

Creative New Zealand and British Council New Zealand support New Zealand arts practitioners to participate in Momentum, which attracts delegates from all over the world.

The programme, which runs from 15th to 21st August, provides the opportunity for participants to build relationships with venues and producers in Edinburgh, the wider Scottish cultural sector and the international arts community that comes to Edinburgh during the festivals.

Delegates receive $3,200 towards their travel costs; in addition to six nights’ accommodation in Edinburgh, access to the delegate centre, a ticketing allowance and invitations to hosted events. Bespoke itineraries for each delegate will include meetings with key arts organisations, venues and producers, access to in-demand shows and networking events.

Commenting on the programme, Creative New Zealand International Manager Cath Cardiff stated “we’re confident that these delegates will use this opportunity to their best advantage.

“The projects and companies they represent are an indication of the diversity and quality of work being produced in New Zealand suitable for an internationally competitive environment.”

The British Council’s Director for New Zealand and the Pacific, Ingrid Leary added “it’s a privilege to be able to support such a significant event in the global arts calendar in a way that reinforces the links between Scotland and New Zealand, which have existed for so many years.

“We look forward to seeing what opportunities, collaborations, showcasing and exchanges occur as a result of these six incredible artists traveling to Edinburgh.”

Momentum is delivered through a partnership between British Council Scotland, Festivals Edinburgh and Creative Scotland, with the additional support of the City of Edinburgh Council, Event Scotland and the Scottish Government. It attracts producers, funders, media, cross-art form programmers, curators and cultural entrepreneurs.

More than 100 delegates from more than 20 countries are expected to participate in the programme.