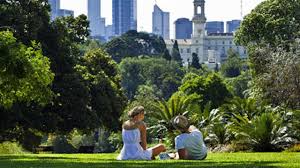 Silver, who oversees the world famous Central Park, was speaking at the Planning Institute of Australia national conference in Melbourne earlier this month, where he expressed the view that not enough people were visiting Melbourne's parks, calling on the city to introduce new "destinations" for people of all ages.

Silver told Melbourne newspaper The Age that when wlaking  through Fitzroy Gardens to the east of the CBD recently he noticed that the park "did not seem heavily used" and there was not enough seating.

Silver, a former President of the American Planning Association, told The Age “what will happen is that people will either sit in the grass or keep walking.

"If Melbourne wants to retain that liveable city rating … I would hope they would start to think about the different uses that can happen in the parks."

In response, Melbourne Lord Mayor Robert Doyle told The Age that Melbourne had a model of "active" parks where big events and sporting events were held, as well as more peaceful gardens and "reflective spaces".

Lord Mayor Doyle stated "I think our system is pretty enviable and I wouldn't want to see all our parks become event spaces. They have to have times to be parks.”

There are about 950 activities held in Melbourne's open spaces every year, ranging in size from the Melbourne Flower Show to small weddings. Notably, there are also some large permanent attractions including Melbourne Zoo in Royal Park and Fitzroy Garden's Cook's Cottage, cafe and visitor centre.

The former president of the American Planning Association said that cities with large suburban areas such as Melbourne tended to take parks for granted "because you basically have parks in your own backyard".

However, he felt that situation will change as the city's population continued to grow.

The Melbourne City Council is in the process of expanding its 480-hectare park network, with a plan to create another 24 hectares of open space, mainly by ripping up unused roadway.

Click here to read the original article in The Age.