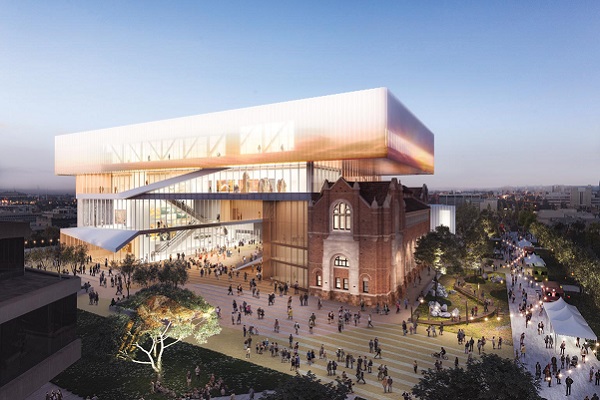 ​The new Western Australian Museum will open in the Perth Cultural Centre on Saturday November 21st, 2020 with a nine-day festival expected to attract tens of thousands of visitors.

Designed by international architect consortium Hassell + OMA, and built by managing contractor Multiplex, the new Western Australian Museum will reopen on the same site it has occupied since it first began as a geological museum in the Old Perth Gaol, in 1891.

Ticket holders selected by ballot will be able to take preview tours of the Museum and get a taste of the extraordinary stories and experiences on offer inside. There are eight new permanent galleries, a 1,000metre2 temporary exhibition gallery, life-long learning studios, and retail and café spaces.

The $400 million redevelopment will be a significant cultural tourism attraction for Western Australia.

"Importantly, underpinning every visitor experience is the latest scientific and cultural research, connecting with State and National Curriculum priorities and promoting Science, Technology, Engineering, Arts and Mathematics, or STEAM, learning across all ages."

Five of Perth's significant heritage buildings have been revitalised and integrated with an architecturally stunning new building, that is already being viewed as Perth's newest landmark destination.

Tickets to the opening festival will be made available on the Western Australian Museum's website later this year.

The new Museum has been developed with a people first approach and features the voices of Western Australians, sharing their stories their own way.

From the formation of the universe to the latest inventions, from dinosaurs to new species found nowhere else on the planet, the new Western Australian Museum will remind us that WA is a place of wonder.

More than 50,000 people around WA have contributed their thoughts to the development of the Museum's exhibitions, programs and stories. Four community panels have also contributed their input over the past five years, focusing on access and inclusion, education, and children and young people.

One of the eight permanent galleries, Ngalang Koort Boodja Wirn, is dedicated to sharing traditional and contemporary Aboriginal culture, and history. However, the stories and perspectives of Aboriginal and Torres Strait Islander peoples are woven throughout the Museum, recognising the primary rights of Australia's first peoples in practicing and expressing their cultural heritage.

Western Australian Culture and the Arts and Heritage Minister David Templeman adds "I am truly delighted that our spectacular new Western Australian Museum has evolved from the same buildings it has occupied for nearly 130 years.

"The stunning reimagining of these significant heritage buildings has breathed new life into the Perth Cultural Centre and will once again position the Western Australian Museum at the very heart of its community."