Auckland’s Wynyard Quarter is set to open five new attractions by mid-2011 – each located around the boulevard of Jellicoe Street, which will be the destination’s cultural and social heart.

John Dalzell, Chief Executive and Project Director of Sea+City Projects Ltd, the company managing the revitalisation of Wynyard Quarter on behalf of partners Auckland Regional Holdings and Auckland City Council, says that people visiting Wynyard Quarter in the next 12 months will be able to see first-hand the transformation of Jellicoe Street public space taking place on the seaward side of the Auckland Fish Market, which remains fully operational and open for business during this time.

As Dalzell explains “over the last five years we’ve cleared about eight hectares of tanks off the 16 hectares of land in the Sea+City Project area within Wynyard Quarter, and have comprehensively completed planning, design and preparatory work. It is now great to see work going on above ground and to know that we’re on track to welcome people down here in time for the Rugby World Cup 2011.

“Key areas planned to be complete include North Wharf on Jellicoe Harbour, Silo Park at the western end of Jellicoe Street and the public plaza at the eastern end. Wynyard Crossing, which connects Wynyard Quarter to the CBD and rest of the waterfront, and Auckland City Council’s Viaduct Events Centre will also be complete.”

On North Wharf the working waterfront will be celebrated. New buildings will be constructed on either side of the old Red Shed to house a range of seafood-related eateries. They have been set back from the wharf edge, creating a wide promenade where people can enjoy a lazy stroll, sit and have a coffee or watch the fishing boats unload their catch. 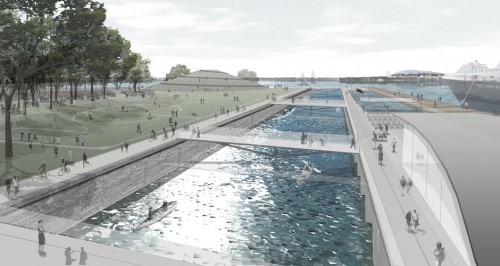 At the western end of Jellicoe Street will be a public open space where people can relax, have a picnic, watch the kids at play or enjoy previously obscured views out to Westhaven and the Harbour Bridge. The ‘six-pack’ and the single Golden Bay cement silos are being retained in recognition of the area’s industrial heritage, and people will be able to see elements of the marine industry at work from the water’s edge.

At the eastern end of Jellicoe Street where Wynyard Crossing lands in Wynyard Quarter will be a large public plaza. It will include seating, art and steps down to the water’s edge. The bridge will also give easy pedestrian access to the Viaduct Events Centre on Halsey Street Extension Wharf.

Sea+City Projects Ltd is also working with Auckland Regional Council (ARC) to bring trams back to Auckland’s waterfront. The ARC has given its formal support to a heritage tram project, the first phase of which will see heritage trams circuiting Wynyard Quarter and Wynyard Crossing, providing pedestrian and cycle access to Quay Street and on to the Britomart Transport Centre. Sidings at the western end of Jellicoe Street will house the trams in a structure next to Silo Park.

Combined with the recent announcement by Kiwi Income Property Trust and ASB Bank to locate the new ASB headquarters there, Wynyard Quarter’s revitalisation is well underway. The building, which is planned to be complete by 2013, will be on the corner of Halsey and Jellicoe streets.

“The possibility of having the Auckland Theatre Company make its home in Wynyard Quarter in future is also exciting. The proposal for a 600-seat main bill theatre and ASB’s 200-seat auditorium would help activate the area both day and night,” adds Dalzell.

There has also been a high level of interest in developing Site 18, which includes 1.6 hectares of land and adjacent water space in the marine precinct on the western edge of Wynyard Quarter. If fully developed in accordance with the concept plans - which include workshops with show rooms, a sail loft and roof-top rig yard, a high capacity boat lift, a 12 storey building with apartments on the upper levels and new berthage for vessels up to 90 metres - it will give a huge boost to the superyacht refit market by allowing Kiwi businesses to compete on the international stage.

Images: The plan for the revitalisation of Auckland's Wynyard Quarter (top) and the planned public plaza in the development (below).