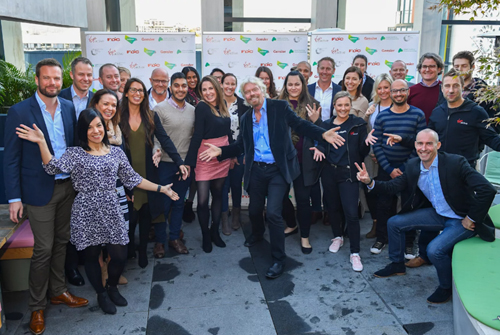 Virgin Active Health Clubs are to launch a new global facility concept with the opening of a club within Sydney’s Barangaroo development.

Located on a floor adjacent to Barangaroo’s Fitness First Titanium club, within The Streets of Barangaroo concept area, the new 520 metre² facility will operate quite differently to Virgin Active's existing six clubs in Australia, which sit at around 4,500 metre² in size. Designed with the Barangaroo community in mind, there’ll be a greater emphasis on group exercise classes, providing a short escape for office workers to refresh their bodies and minds, while also allowing for more social interaction in an energetic environment.

Set to open in 2018, Virgin Active’s latest health and wellbeing offering will be aiming for a 6 star Green Star rating and a Platinum WELL building standard.

Commenting on the new facility during a recent Australian visit, Virgin Group Chairman Sir Richard Branson explained “the approach we’ve taken with this new club is very close to my heart.

“The focus on sustainability, people and customers through a club that provides a balanced approach to exercise and wellness, will surely make a great place to work out in.”

Virgin Active are currently recruiting for a number of positions within the club.