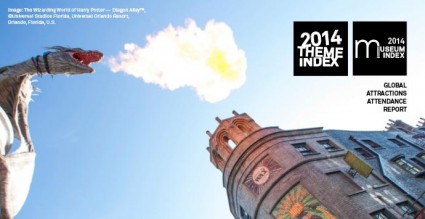 The TEA/AECOM Theme Index and Museum Index 2014 has been released, showing ongoing growth in global theme and water park attendance but also noting that growth in museum attendances dipped when compared to the previous year.

Visitors to theme parks globally grew 4% in 2014, maintaining the same level of growth as in 2013.

Both Universal Studios Japan and Universal Studios in Florida reported an increase in visitor numbers since 2013 by around 17% - success attributed to the extremely popular Wizarding World of Harry Potter experiences at each attraction.

Suggesting that the theme park industry's growth was "post-recession rebound", AECOM Senior Vice President of Economics, John Robinett explained that “Asia will keep growing and raising the bar for quality and the Middle East is making a comeback."

Other findings in the report show that Merlin Entertainments registered a 5% attendance increase across their operations, keeping them as the second largest operator in the top 10 theme park groups worldwide.

Meanwhile there was only small attendance growth at the world’s leading museums with a 1.6% increase in museum attendances in 2014. By contract, in 2013, attendance at the top 20 museums globally grew 7%.

Commenting on this, Robinett explained “museum attendance worldwide is very sensitive to the schedules of blockbuster travelling exhibitions.”

Visitors to waterparks globally grew around 3%, compared with 7% in 2013.

TEA (the Themed Entertainment Association) is an international nonprofit alliance founded in 1991 and based in Burbank, Calif. TEA represents some 8,000 creative specialists, from architects to designers, technical specialists to master planners, scenic fabricators to artists, and builders to feasibility analysts working in some 1,000 firms in 40 different countries. TEA presents the annual Thea Awards and the TEA Summit and hosts the annual SATE conference (Story, Architecture, Technology, Experience). TEA produces a variety of print and electronic publications, including the annual TEA/AECOM Theme Index, TEA Annual & Directory and Thea Awards Program. Visit www.TEAconnect.org.

AECOM is a global provider of professional technical and management support services to a broad range of markets, including transportation, facilities, environmental, energy, water and government. With approximately 45,000 employees around the world, AECOM is a leader in all of the key markets that it serves. AECOM provides a blend of global reach, local knowledge, innovation and technical excellence in delivering solutions that create, enhance and sustain the world's built, natural, and social environments. A Fortune 500 company, AECOM serves clients in more than 150 countries and had revenue of $8.0 billion during the 12 months ended March 31, 2013. More information on AECOM and its services can be found at www.aecom.com.

The TEA/AECOM Theme Index and Museum Index is a collaboration of the Themed Entertainment Association (TEA) and the economics practice at AECOM, a global provider of technical-professional and management-support services.