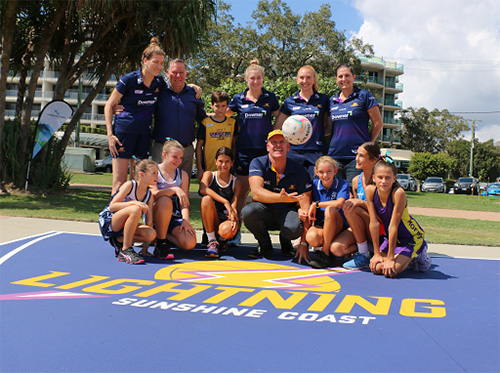 The court features a custom playing surface along with handprints of the Sunshine Coast Lightning players and coaches around the court.

Sunshine Coast Councillor Jason O’Pray stated “the netball court will not only support and encourage our local community to participate in netball, it will also provide more sport and tourism opportunities, creating more to see and do on the Sunshine Coast.

“And with netball continuing to be one of the most popular social sports in our community, I’m certain this facility will be welcomed by residents and visitors alike.

“It’s all part of our commitment to be a healthy, smart and creative region.”

Sunshine Coast Lightning Chief Executive Danielle Smith said she was thrilled with the court’s design in the Lightning colours, adding "from the very beginning, we have had a strong focus on Lightning being a club for the coast community, and this new court provides another lasting legacy of the team’s impact so far.

“It is also fantastic to see each of the premiership players and coaches from our first two seasons recognised with their handprints lining the court.

“One of the major benefits of partnering with the Sunshine Coast Council on this project is the impact it will have on grassroots netball.

“We hope we can encourage and inspire everybody to be more active in their community and netball is a great way to achieve this.”

The court is free and open to the public all year round.