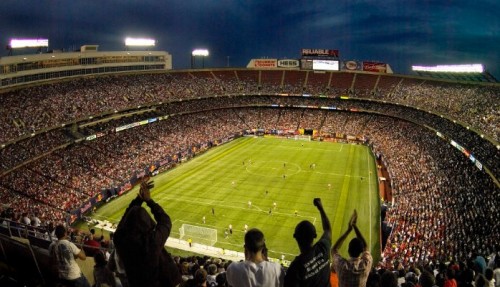 Plans have been unveiled for a $270 million, 45,000 seat rectangular stadium for the city of Adelaide. To be built on the edge of the city at Bonython Park, the plan is being advanced by Adelaide United Chairman Dario Fontanarosa.

Fontanarosa, who is also Group Chief Executive of Bianco Building Supplies, believes United and the game were being held back by continuing to play at Hindmarsh Stadium, stating "the reason people don't come to our games is that unless you come in a cab it's hard to get there," adding "look at Adelaide Oval, 26,000 attended the December game against Sydney FC but many were turned away. People want to come to a city stadium."

Fontanarosa believes such a stadium would be able to host major football games such as a World Cup qualifier or even an A-League Grand Final.

Requiring both State and Federal Government funding, the plans include a hotel complex, which would also house bars, cafes, shops and cinemas.

Meanwhile, the Adelaide 2050 group has identified the Keswick railyards as a site for an international sporting precinct.