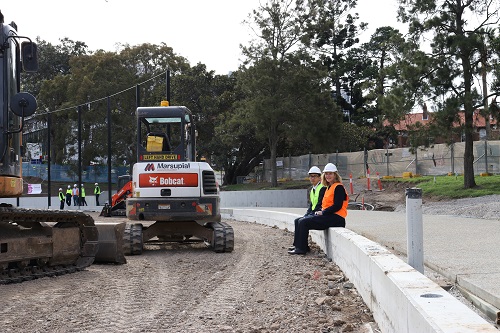 A key milestone in Willoughby City Council’s largest project of 2018/19, a new sporting field at Gore Hill Park, has been reached.

Touring the site on Wednesday (8th August) with local Federal member Trent Zimmerman, Willoughby Mayor Gail Giles-Gidney said she was thrilled with the progress, particularly the synthetic playing surface and playground installation which will commence this week.

Mayor Gail Giles-Gidney stated “the overhaul means versatility and the new offerings such as the playground, perimeter path, outdoor gym and courts will ensure more people can use the space more often.

“The car park, perimeter path and playground will be accessible for prams and wheelchairs, ensuring easy access for all.”

The $10.5 million project was approved by Council in August 2016. It’s funded $9.5 million by the Federal Government’s Community Development Grants Program and $1 million from Council.

The 4.4 hectare site at the corner of Reserve Road and Pacific Highway, St Leonards, has been used as a sporting field for over 90 years. 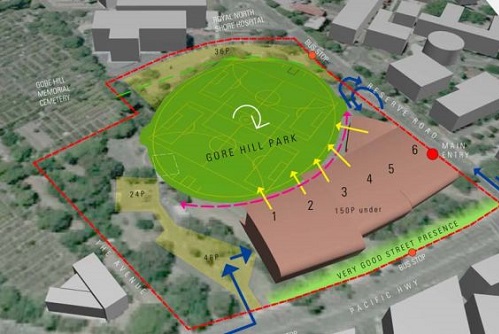 Its redevelopment includes re-orientation of the synthetic playing surface; new floodlighting and park lights; a new playground, outdoor ball courts and outdoor gym; a perimeter walking path and demolition of the existing pavilion and change room.

Its redevelopment includes re-orientation of the synthetic playing surface; new floodlighting and park lights; a new playground, outdoor ball courts and outdoor gym; a perimeter walking path and demolition of the existing pavilion and change room.

A Crown Land reserve, the park was originally part of a 140-acre dedication for public recreation in 1869, with Willoughby Council as the trustee. By 1928 both cricket and football were being played on a levelled playing field with a concrete cricket pitch.

The project is expected to be completed in January.