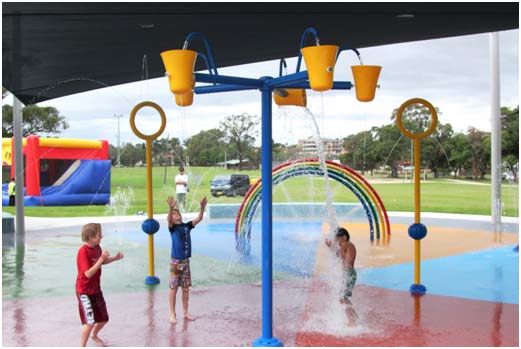 Parramatta’s first Splashpad opened to the appreciative smiles of local Merrylands residents on the 9th April 2014.

Divided into three age-appropriate zones and accessible by wheelchairs and other mobility devices, the Splashpad is already providing water fun for people of all ages and abilities.

Located at Granville Park, the Splashpad will be open nine months of the year.

Welcoming the opening of the Splashpad, Parramatta Lord Mayor John Chedid told Sydney newspaper The Daily Telegraph that the attraction would provide plenty of fun during warmer months for children living locally.

Lord Mayor Chedid stated “the Council is thrilled to deliver families another attraction in Granville.

“Kids can spend the day splashing about while parents can kick back and relax in the park.”

As well as recycling water, the Splashpad’s energy-efficient, smart control system automatically switches off when not in use, for maximum sustainability.

For more information click here to contact Playrope via their entry in the Australasian Leisure Management Supplier Directory.