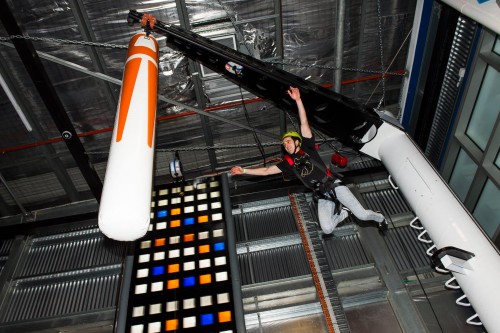 The Sky Zone Trampoline Park in the Sydney suburb of Alexandria has expanded with Sky Climb, an indoor climbing facility with over 30 different climbing features.

Opened last week, Sky Climb is the first indoor climbing course of its kind in Sydney but is part of a current wave of new climbing and high ropes attractions in family entertainment centres, zoos, parks and fitness clubs across Australia.

Introducing Sky Climb, Sky Zone Marketing Director Caroline Ryan explains “being one of the most adrenaline-pumping sports you can do, this physically and mentally demanding activity requires more than just working the wall.

“You really have to train your mind and body hard to literally push yourself to new heights but all while have a good time with friends.”

Indoor rock climbing imitates the experience of outdoor climbing but in a more controlled (and safer) environment.

Ryan adds “indoor climbing is now an upward fitness trend and a purely social experience practiced by people of all ages and athletic abilities.

“We need to shift the mindset that climbing is an extreme sport, people are amazed to realise that anyone can do it once they have a go."

Globally, more than 25 million people are regular climbers with major cities like London and Paris each having over 300 indoor climbing walls while there are more than 600 climbing walls across the United States.

Many of the Sky Climb's features are Clip 'N Climb products installed by The Highgate Group.

For more information go to www.skyzone.com.au

Click here to contact The Highgate Group via their entry in the Australasian Leisure Management Supplier Directory.