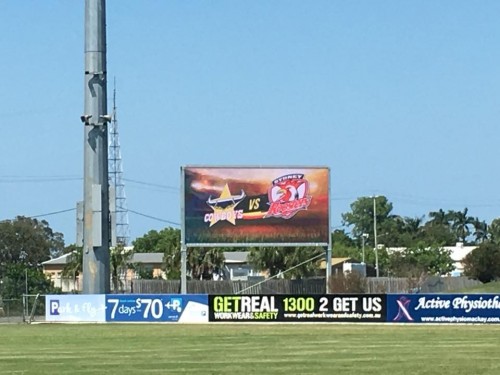 The cyclone-damaged former scoreboard at BB Print Stadium Mackay has been replaced by a new  6 x 3 metre LED screen.

Aiming to improve the fan experience at the venue, Mackay Regional Council Mayor Greg Williamson sees that the digital upgrade is so much more than just a scoreboard.

“For example, it can be used for movie nights or for outdoor functions and events,” he said.

“This offers the stadium a new revenue stream and makes it more attractive as an events venue.”

Mayor Williamson said the new screen was built to the highest outdoor standards and could withstand extreme weather events, adding “unfortunately, the old scoreboard suffered water damage, but it was covered under insurance and we want to make sure this new screen is built tough for our tropical conditions.”

The digital LED scoreboard and screen was built in Mackay by RP Digital after they won the tender for the project.

BB Print Stadium Mackay is home to the Intrust Super Cup's Absolute Enterprises Mackay Cutters and with a 12,000 capacity is a major draw card for the Mackay region.

The venue was funded by the Federal Government at a cost of $11.3 million and officially opened in August 2011.