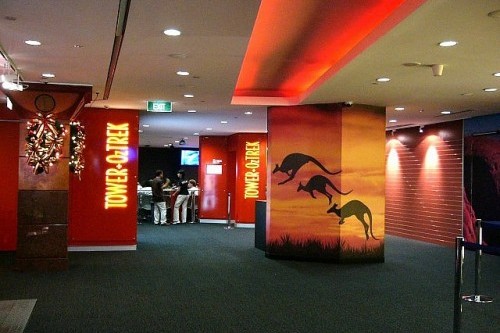 Sydney Tower has launched a new motion theatre experience - taking guests on a 'virtual reality' wild and rickety trip through an abandoned gold mine.

Showing throughout each day from 27th October through to the end of January 2009, guests will be strapped into the OzTrek theatre's moving seats for the new 'Devil's Mine' ride.

With the help of a six-metre high screen, surround sound and real-motion seating, viewers will feel like they are hurtling through mineshafts, crashing through barricades, dropping suddenly into caverns and dodging bats as they race to escape.

To celebrate the opening of the new ride, the podium level of Sydney Tower will be themed with Halloween-style decorations and staff will be dressed in spooky costumes.

Visitors will be able to upgrade their Sydney Tower Observation Deck and OzTrek entry tickets, priced at $25 for adults and $15 children, to include the new ride for an additional $5 per person.

Sydney Tower Brand Manager Jodie Crane said the new ride would give families and visitors a new reason to visit Sydney's tallest building this spring, who explained "the new Devil's Mine ride is a great excuse to get the kids out of the house for a thrilling ride and to catch the best birdâs-eye views of our sparkling city from 250 metres above street level."

The new ride will show daily in the OzTrek theatre in between OzTrek experiences at Sydney Tower. OzTrek combines surround sound, 3D imagery and real-motion seating to take visitors on a fun ride across Australia, moving through its geographical, cultural and historical highlights.